Over Look and Learn's twenty-year history, a number of titles were merged into the paper:

Look and Learn’s initial success was such that Leonard Matthews immediately put forward the idea of a companion title. The first proposal was for a magazine to be called Junior Geographic, to be edited by John Sanders, which was eventually turned down by the board of directors. Matthews was more successful with Treasure, a companion title for younger readers aged 5-9. Launched on 19 January 1963, the new paper carried the sub-title “early steps to looking and learning,” and it was hoped that the youthful audience would grow up to read Look and Learn which was aimed primarily at 10 to 14-year-olds. 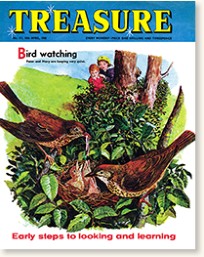 Treasure was edited by Arthur Bouchier, a veteran editor at Fleetway, with the aid of Edward Northcott who had worked on The Children’s Newspaper for many years. Art editor Phil Gilles attracted some delightful work from artists such as Clive Uptton and C F Tunnicliffe, who provided the new paper with many of its covers. Inside, the contents were dominated by fairy stories, learning puzzles and colourful features. One favourite amongst these delights was ‘Wee Willie Winkie’, illustrated by John Worsley, about the adventures of a young boy and a baby elephant named Hannibal who, thanks to owning a special greenticket, can travel anywhere in the world for free. Another favourite was Tufty - a squirrel who had become the mascot of the Royal Society for the Prevention of Accidents - who featured in hundreds of short stories. By the mid-1960s, there were over 2,000 Tufty Clubs in Great Britain and the success of the Society's campaign was no doubt aided by the appearance each week of Tufty and his furryfolk friends in Treasure. 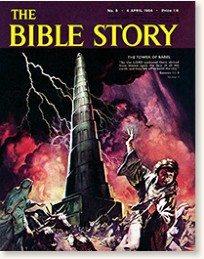 The Look and Learn stable of titles was expanded again two years later with the launch of The Bible Story on 7 March 1964. This new paper, edited by Edward Holmes, contained a variety of articles on aspects of the Bible, retelling many stories and parables in terms easily understood by children alongside articles on animals which featured in the Bible and biographical strips such as ‘The Story of Abraham’ illustrated by Pat Nicolle and ‘Herod the Great’ illustrated by Don Lawrence. Although beautifully produced, the high price of 1/6d. made it too expensive for children to buy, while parents showed no great enthusiasm for it. Bible Story lasted a mere 29 issues, folding on 19 September 1964.

In the spring of 1965, Leonard Matthews was making plans for another new paper intended to be a modern version of Eagle published by Odhams Press, which Fleetway had recently taken over. John Sanders, who had been editor of Look and Learn since its launch, was keen to move into Fleetway’s mainstream, which for the juvenile department meant comic books. He was attracted to Ranger when he was shown the dummy by Matthews as it contained a number of new strips. These were the work of veteran Michael Butterworth and ranged from the science fiction epic ‘The Rise and Fall of the Trigan Empire’ to adaptations of classic novels like ‘Treasure Island’, illustrated by John Millar Watt, and ‘King Solomon’s Mines’, illustrated by Michael Hubbard and the schoolboy adventures of ‘Rob Riley’. 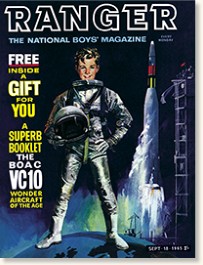 Ranger also contained serials by John Hunter, Richard Armstrong (the award-winning ‘Sea Change’) and Captain W E Johns (a reprint of his pirate novel, ‘Champion of the Spanish Main’), features on flying, sport, cars, books and true stories. To Sanders, the contents seemed old-fashioned for a modern, mid-1960s audience and he was proved right when the paper folded on 18 June 1966 after only 40 issues.

Its merger with Look and Learn had a major impact as it introduced comic strips to the paper for the first time, amongst them ‘Rodney Stone’ (from the novel by Sir Arthur Conan Doyle), ‘Dan Dakota - Lone Gun’, ‘Space Cadet’, ‘Rob Riley’, ‘Trigan Empire’ and a translation of the famous French cartoon, ‘Asterix’. Features ‘Into the Blue’ and ‘The Story of the Soldier’, illustrated by Eric Parker, and Roland Fiddy’s cartoons also survived the transfer.

Most mergers had little impact as far as readers were concerned. Finding Out was a rival publication launched in 1962 which was taken over by Fleetway in 1967 and almost invisibly merged with Look and Learn as had The Bible Story and The Children’s Newspaper before it.

In 1968, Fleetway had launched an English language edition of Tell Me Why, a British-Dutch co-production, printed and published in Holland but edited in London by an Italian, Velio Vuolo. Tell Me Why was designed very much along the same lines as Look and Learn in its coverage of history, geography, science and literature, although the paper was printed in full colour and contained less text features.

On 27 March 1970, IPC re-launched Tell Me Why as World of Wonder which was now edited in-house by Bob Bartholemew but still printed and published in Holland. The magazine was a reasonable success, absorbing Treasure with its 44th issue (23 January 1971), but, like Look and Learn, suffered from declining sales. It folded on 1 March 1975 after 258 issues.

A year earlier, IPC Transport Press and editor Ken Roscoe (a former Look and Learn sub-editor) had launched Speed & Power, the first issue dated 22 March 1974. As its name implied, Transport Press published a range of titles covering all aspects of transport and had access to thousands of photographs of aircraft, cars, ships, trains and space rockets. It was a resource just waiting to be tapped into and Speed & Power made the most of it, publishing articles about the latest, the fastest, the toughest and strangest vehicles on (and off) the planet. Artists Wilfred (Wilf) Hardy, Keith Fretwell, Michael Whittlesea, Gerry Wood, Graham Coton and John S Smith offered their take on vehicles in action and imaginative and futuristic designs, some of which (like the TGV) have since come into existence.

Speed & Power was launched successfully but went into terminal decline after a few months, gradually losing colour pages. When it switched to lower quality paper the end was in sight and, on 14 November 1975, it folded with issue 87. 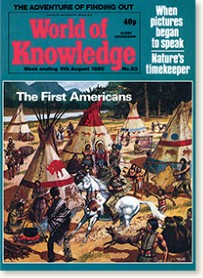 For their next launch, IPC Magazines drew on an idea that dated back seventy years to the Children’s Encyclopedia. World of Knowledge was designed along the same lines in that it would build up into a comprehensive encyclopedia of knowledge as each weekly issue appeared. Editor Bob Bartholemew had a rather rocky time getting the paper onto the news-stands as various delays meant that the February 1979 launch was pushed back twice and the first issue finally appeared on 23 January 1980. Despite a high promotional budget, the paper failed to find a large enough audience and closed after a year with its 50th issue on 3 January 1981.