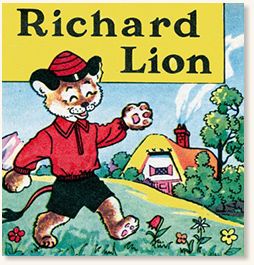 Richard Lion, permanently dressed in a red fleece and green scarf, topped with a red school cap, is an adventurous young lion cub who lives in the village of Gay with his mother and father. His best friends are Pug (a dog) and Henry (a baby kangaroo).

Richard's adventures are many and varied: on holiday he helps free some magpies from an underground trap, he battles underwater pirates at Davy Jones' locker and meet the Star-folk of Starland who ride on winged ponies. Richard reaches these lands in a variety of ways, from meeting a magic fish to stumbling across a talking kite. Many other adventures take place around the village where Dr. Lion is kept busy with a stream of injured animals taken in by the young cubs.