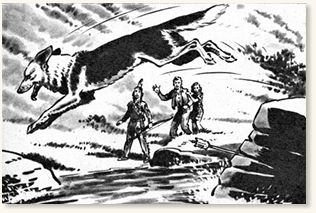 Prince the Alsatian is known as the Wonder Dog of the Golden West for his Rin-Tin-Tin-style adventures in the American Wild West. Owned by Texas Jack, the sheriff of Prince Haven, the wonder dog spends his time out on the sun-scorched prairie where Cherokee Indians roam. Some, like Chief Swooping Eagle, hate the advance of the white man across the plains and make it their business to harass and stalk newcomers; others, like Timber Wolf, become friends after Texas Jack and Prince help rescue his son, Little Cub, from the clutches of the crooked Blackie Leggett.

Prince was later pensioned off and went to live with Timothy and the playful puppies Wink and Blink (qv).