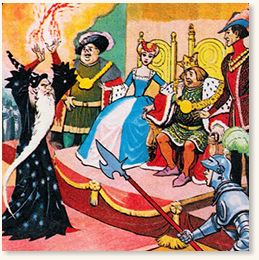 Princess Marigold lives in a magic land of wizards and fairies. Marigold is the daughter of King Florian who rules over a jolly little kingdom where, at first, his biggest problem was to see his daughter married to a handsome prince. This she does after meeting Prince Strongbow … but only after she has offended the evil Wizard Weezle who promptly turns the King, the Princess and all the courtiers into animals.

A dip in the magic lake returns them to normal and, after their marriage, the Prince and Princess have two children – Prince Rupert and Princess Rose – whose lives are forever troubled by Weezle and his evil ways, whether it is putting a shrinking spell on the King, covering Marigold Land with thick snow or even sending everybody back in time to the age of dinosaurs.