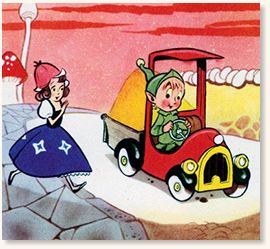 The Merry Stories of Pixie Pip take place in Toadstool Town. Pip is the most inquisitive pixie in town, much to the amusement of all his friends. A curious smell coming from the cellar of Mr Candy's shop causes Pip to fall into the sweet mix; blowing on a whistle he finds brings out the whole Toadstool Town police force; and taking a look inside a removal van causes a chair and other furniture to roll all the way down the high street. But you can be sure that every tale will end with a smile and with Pip signing off "Your merry friend."

Most of the pixies are named are named after their jobs (Mr Doorman Pixie, the doorman, Mr. Mayor Pixie, the mayor, etc.), but on 17 May 1958, Pip introduced his friend Petal, so named because she wears a flower hat. Another special friend was Caroline, a girl from the Big World where Pip was blown one Christmas Day (1959), after which he had as many adventures outside Pixieworld as he did in. In 1960, we were introduced to Mr and Mrs Popple, who became very good friends, although Mr Popple was as clumsy as he was helpful.