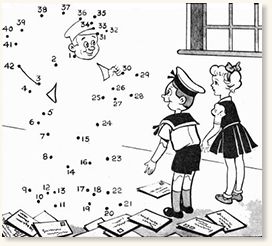 Peter Puppet began as something of a Pinocchio-style living puppet but soon developed a character all of his own. Peter was a puzzle-solver who, with his friend Anna, makes his way to Puzzle Valley where everything is a puzzle – a maze, a word game, a dot-to-dot – and thence to Puppet Land where he is given a message by the King to take to the Royal Puzzler. Before long, Peter and Anna are living permanently in Puzzle Land and solving four or five puzzles every week.