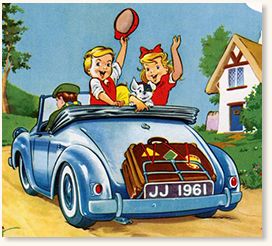 Jack and Jill are the young children of Mr. Honey, who runs Buttercup farm, and Mrs Honey, his wife. Their best friend is Patch the puppy who often gets them into scrapes around the house and with the farmyard animals. Jack and Jill have the curiosity and creativity of all six to eight-year-olds; anything new needs to be explored and anything that delights them in the adult world needs to be re-created around the farm yard, whether it´s a cowboy movie or a horse show.

The format varies over the years: for 16 years (over 800 episodes), the strip was told in four panels with rhyming couplets (later captions); between March 1970 and August 1974, their adventures were related in a single panel with a puzzle element before switching to a black and white internal page.