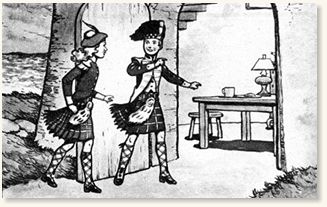 Jamie Gordon, a drummer boy with the Gordon Highlanders, and his friend Annie Stuart are the Gay Gordons whose adventures take place in historical Scotland. Some are quite dangerous, as when Titus Keen locked up his cousin, Colonel Stuart, and the children in the dungeons of Stuart Castle, trying to persuade the Colonel to sign over the castle to him. Others, like when Jamie and Annie help Wee Angus live out his dream of playing the big drum for the Highlanders, are more light-hearted.

After a year in the Highlanders, Jamie leaves to continue his adventuring with Annie and the title changed to 'The Gay Gordon'.