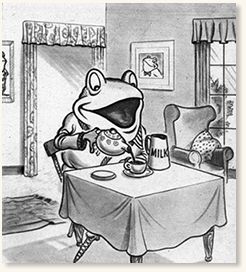 Pompous, demanding and easily angered when things don't go his way, Freddie Frog may not seem the typical 'hero' for a story but there is no denying his star quality. Freddie will boast that he can do anything better than anyone but his actions prove that he is telling fibs. Even something as simple as putting up a deckchair will defeat him, although Freddie and his good friend Terry Tortoise will always end up smiling.