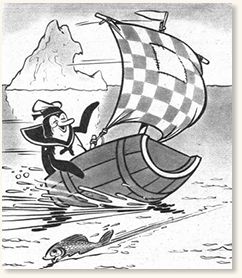 Flipper the penguin has lived all his life on a tiny frozen island. One day a barrel is washed ashore – the perfect thing for him to convert into a boat which he calls 'The Little Nipper'. And so begins Flipper's voyages around the sea as he visits the Seal family on Seal Island, Mr. Dolphin, who runs an underwater school for porpoises, and, finally, the monkeys, hippos, pelicans and other inhabitants of Treasure Isle. In later strips we meet Tom Bowling and his daughter Jane, Flipper's niece and nephew Peter and Poppy, Jumpy the Kangaroo and Jimmy Koala-Bear on Faraway Island. In January 1958, Flipper's wind machine blew his friends to Puzzle Island; Flipper, Peter and Poppy followed and found themselves in a land where everything was a puzzle.