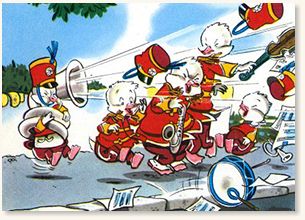 Dagwood Duck is a happy little duck with a desire to try out as many different jobs as he can, whether it's playing the tuba in a marching band or a policeman. Things never turn out quite like he imagines – one blast from the tuba and the rest of the band are left without their hats and, as a policeman, he only manages to cause a traffic jam. Thankfully there is always someone at hand to help and Dagwood often finds himself doing the job in unexpected ways.

Dagwood first appeared in a one-off strip entitled 'The Duck Who Wanted to Sing' in Jack and Jill before finding a regular home each week in Harold Hare's Own Paper.