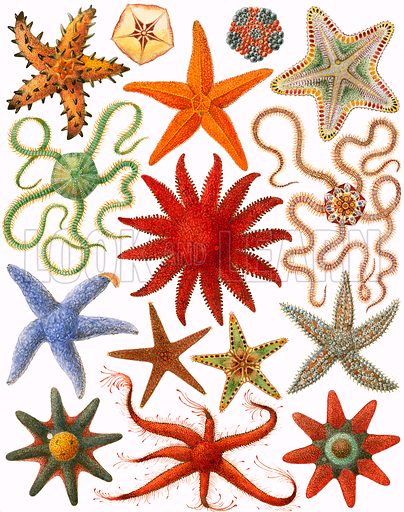 This unusual group of sea animals forms a very varied collection, certainly as far as shape is concerned. But they all have five radiating arms, like spokes of a wheel leading from a central hub, and they all have prickly skins. The Greek word for this group is echinoderms – prickly skins!

The sea urchin, sometimes called the sea chestnut because of its resemblance to the horse chestnut, is not an obvious member of the group. The prickly spines are easy to see – and to feel should you step on one – but its five-arm structure is not so apparent.

However, if the prickly armour is removed its kinship with the starfish is quickly seen, for it has five tube-like feet and five sets of shells forming its skeleton. It also has a complicated arrangement of five sets of teeth with which it scrapes its food from rocks.

The urchin moves slowly on its tube feet in search of seaweed, often returning to the exact rock from whence it set out. In time the rock underneath becomes deeply worn, for the ‘jaws’ of the animal, being on the underside, rub away hollows in the rock. The spines are enough to keep most attackers away, but it also has a second line of defence. The starfish for example, is not deterred by the prickles and when the sea urchin feels itself being attacked by one of these creatures, it lays back its spines and leaves the skin bare.

The starfish stretches out an arm to draw the prey into its mouth – but quickly withdraws, for a series of minute poisonous stings scattered over the urchin’s skin punctures its arm. The scene is repeated until the starfish eventually gives up. Sometimes, however, the starfish patiently pulls out all the stings – and the urchin’s end is near.

The stronger and braver fishes eat sea urchins, and they are a favourite with the sea otters. In many parts of the world, the eggs are regarded as a delicacy. In Mediterranean countries, they are sold on the streets with vinegar added, and in the West Indies they are served for breakfast, cooked like scrambled eggs. END_OF_DOCUMENT_TOKEN_TO_BE_REPLACED

Comments Off on Dazzling starfish