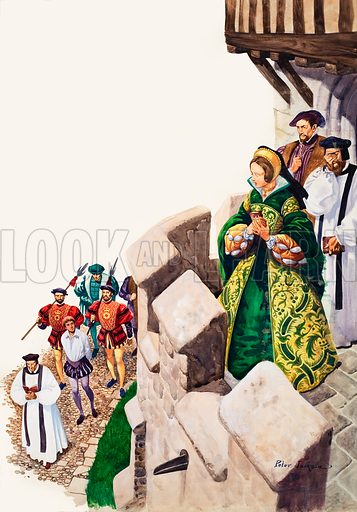 Lady Jane Grey at the Tower of London. Illustration by Peter Jackson

10 July marks the anniversary of the rise to the throne of Lady Jane Grey in 1553. A staunch Protestant, she was the grandniece of King Henry VIII, who wished to pass the succession of the crown down through his younger sister should his children leave no heirs. Jane, married Lord Guilford Dudley, son of the Duke of Northumberland, was proclaimed Queen by her husband following the death of Edward VII. She was taken to the Tower of London, only to be deposed nine days later by Edward’s (Catholic) half-sister, Mary, who was declared Queen on 19 July.

Jane and her husband were charged with treason and Lady Jane, whose reign over England was the shortest in history, was executed at Tower Hill on 12 February 1554. 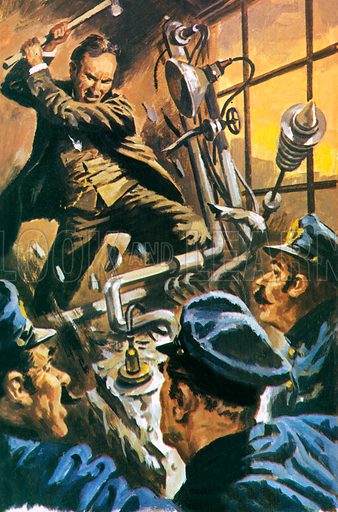 10 July is the birthday of Nikola Tesla, American electrician and inventor. Born in Smilijan, now in Croatia but then part of the Austrian Empire, Tesla was the inventor of wireless, the induction motor and championed the use of alternating current electricity (over the more dangerous direct current).

More pictures relating to the history of electricity can be found here. A much wider selection of illustrations relating to science and scientific discoveries can be found at the Look and Learn picture library.

Comments Off on Birth of Nikola Tesla

The creation of Australia 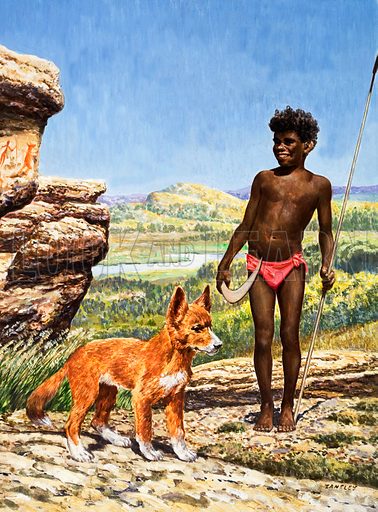 An aborigine boy and dingo, inhabitants of Australia. Illustration by Eric Tansley

9 July marks the anniversary of the creation of Commonwealth of Australia. In 1900, Queen Victoria gave her royal consent to an Act that brought the previously separate colonies on the continent under one federal government.

Many more pictures relating to Australia can be found at the Look and Learn picture library, ranging from the history of Australia’s discovery by Captain Cook, the Australian gold rush, Australian wildlife and native aborigines.

Comments Off on The creation of Australia

9 July is the anniversary of the birth of Elias Howe, inventor of the sewing machine. Born in Spencer, Massachusetts, in 1819, Howe worked as a mechanic specialising in the manufacture and repair of precision instruments. In 1846 he submitted a patent for a machine that would create a lockstitch from two threads.

Howe found it almost impossible to finance production of his invention and was almost penniless. His first significant earnings came from a law suit against Isaac Singer who was selling facsimiles of Howe’s machine. Howe was later able to set up a factory selling his machines and died, in 1867, a multi-millionaire.

Comments Off on Birth of Elias Howe 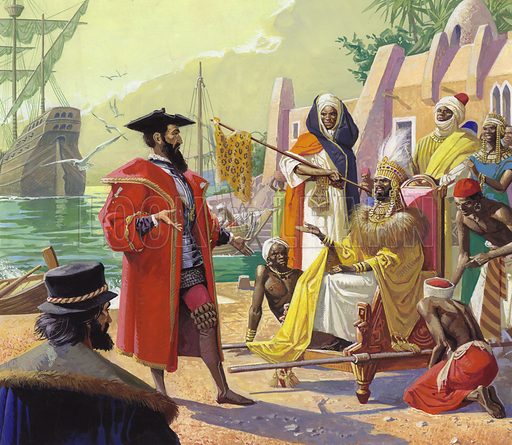 8 July marks the anniversary of the epic voyage of Vasco da Gama, who led a fleet of four ships, crewed by 170 men, from Portugal in 1497, along the coast of Africa and thence across the Indian Ocean to India, landing at Kappad on 20 May 1498. The return trip took even longer. He left India in August 1498, arriving in what is now Kenya in January 1499 and eventually returning to Portugal in September 1499.

Da Gama was richly rewarded for his efforts and was named “Admiral of the Indian Seas”. 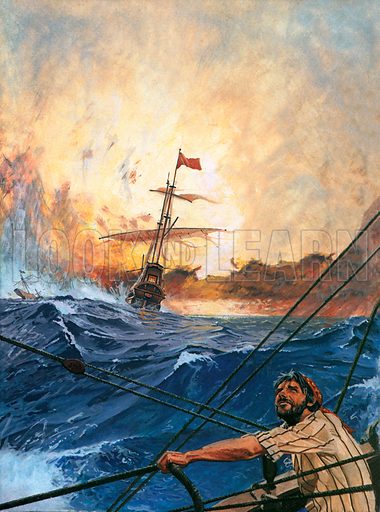 More pictures of Vasco da Gama can be found here. A great many illustrations relating to India can be found at the Look and Learn picture library.

Comments Off on Vasco da Gama sets sail for India 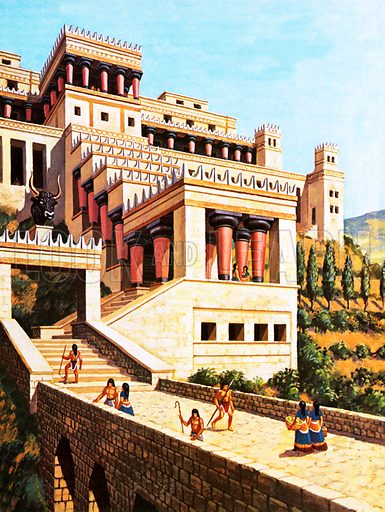 A recreation of the Palace of Knossos. Illustration by Harry Green

8 July is the anniversary of the birth of Sir Arthur John Evans, the archeologist who discovered the site of the Palace of Knossos on the island of Crete. Born in 1851, Evans’s interest in archaeology was encouraged at Oxford and his travels instilled an even deeper fascination. In 1900 he began excavations at Knossos and within months had uncovered a large portion of the Palace of Minos.

Thanks to Evans, much was discovered about the Minoan civilisation and written language. Knighted in 1911, he died in 1941, shortly after his 90th birthday. 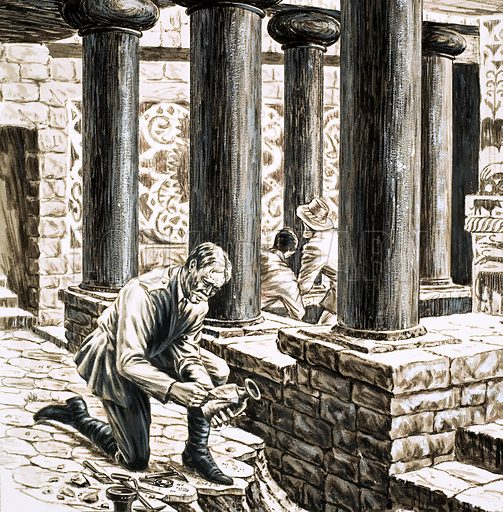 More pictures of Arthur Evans and his discoveries at Knossos can be found here. Many more illustrations relating to archaeology and the rediscovery of ancient civilisations can be found at the Look and Learn picture library.

Comments Off on Birth of Sir Arthur Evans

Death of King Edward I 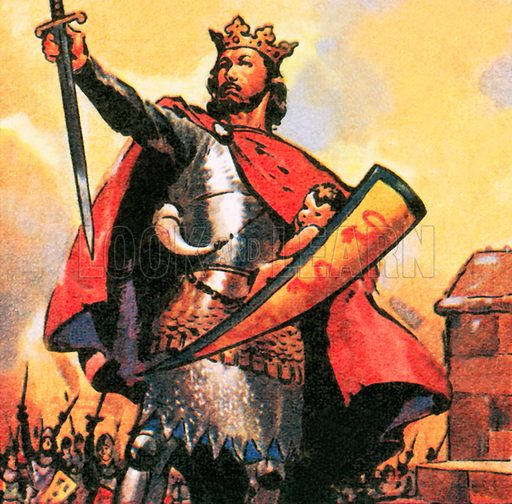 King Edward I, known as the Hammer of the Scots

7 July is the anniversary of the death of King Edward I, also known as Longshanks for his tall, wiry physique and The Hammer of the Scots for his lengthy warring with Scotland, which ended in brief success. Edward confiscated the Scottish Coronation Stone, also known as the Stone of Destiny, and moved it to Westminster Abby, as can be seen in the picture below. 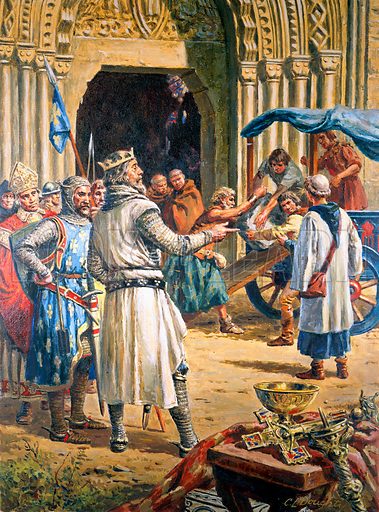 Edward I removing the Coronation Stone of Scotland. Illustration by C. L. Doughty

Edward’s problems in Scotland flared up again. It was he who defeated William Wallace but he was involved in an ongoing battle with Robert the Bruce at the time of his death in 1307, leaving his son, Edward II, to continue the campaign.

More pictures of Edward I can be found here. Many more illustrations relating to royalty and the monarchy can be found at the Look and Learn picture library.

Comments Off on Death of King Edward I

7 July marks the anniversary of the first radio programme dedicated to gramaphone records broadcast by the BBC. The show, broadcast in 1927, was presented by Major Christopher Stone, an Eton-educated former Royal Fusilier, who collected sea songs and ballads and edited a magazine entitled The Gramaphone, founded in 1923 by Stone’s brother-in-law, author Compton Mackenzie.

Although the idea for broadcasting gramaphones was initially turned down by the BBC, they subsequently relented and thus Stone became the first British disc jockey. 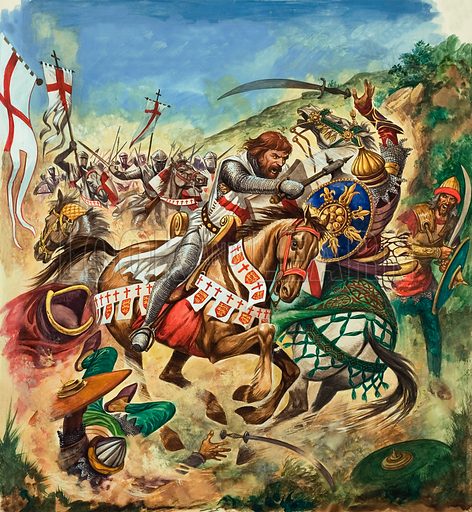 Richard the Lionheart battling in the Crusades. Illustration by Peter Jackson

6 July marks the anniversary of the crowning of Richard I – better known as Richard the Lionheart – as King of England. Before that event in 1189, following the death of his father Henry II, he was already considered a great military leader. Although an iconic figure in British history, he actually spent little time in England: he lived in France and most of his reign was taken up with fighting the Crusades.

Comments Off on Richard the Lionheart crowned King

Louis Pasteur and the invention of vaccines 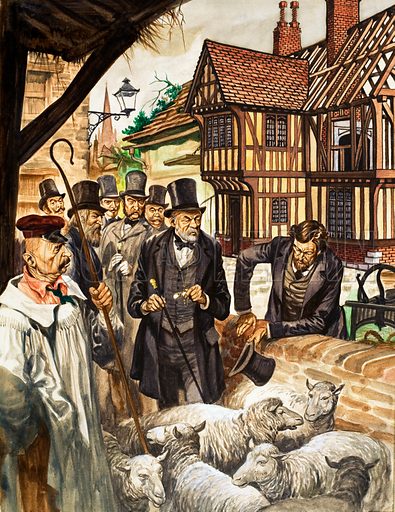 Louis Pasteur checking the results of his experimental vaccine. Illustration by Peter Jackson

6 July is the anniversary of the successful testing by Louis Pasteur of a vaccine against rabies. In 1885, Pasteur treated a 9-year-old boy named Joseph Meister after he had been mauled by a rabid dog. The boy did not contract rabies.

Pasteur’s programme of innoculation had first attracted attention when he used vaccines to stop cholera and anthrax amongst farm animals in the 1870s. His invention of a method to stop milk and wine causing illness is still known today as pasteurisation.

Comments Off on Louis Pasteur and the invention of vaccines