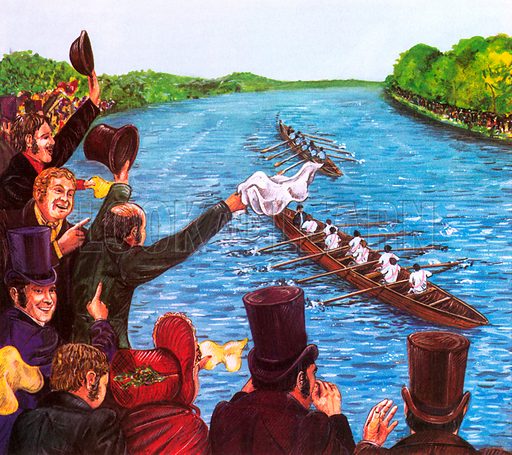 10 June is the anniversary of the Boat Race between Oxford and Cambridge. The rowing race between the two university teams first took place in 1829 and has been an annual event since 1856, with brief breaks during the two world wars.

The first race took place at Henley-on-Thames after a challenge between friends, Charles Merivale (a student at Cambridge) and Charles Wordsworth (who was at Oxford). The race was won by Oxford.

For more pictures of the Boat Race, follow this link. A great many pictures of other types of rowing boats throughout history can be found here.

Comments Off on The very first Boat Race

Posted in Anniversary, Famous battles, History on Monday, 31 May 2010 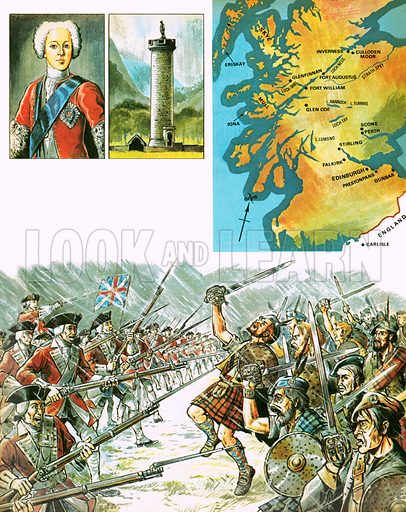 The Battle of Glen Shiel. Illustration by Dan Escott

11 June is the anniversary of the Battle of Glen Shiel, fought during the Jacobite Rising in 1719. The Jacobite uprisings in the late 17th and early 18th centuries were aimed at restoring James VII to the throne of Scotland. The Battle of Glen Shiel was a decisive battle, ending in the defeat of the Jacobites, although they rose again in 1744-45 with Bonnie Prince Charlie (the Young Pretender) at their head.

Many more pictures from the days of the Jacobite risings, including the Battle of Culloden, can be found here. A wide variety of illustrations relating to the history, customs and wildlife of Scotland can be seen at the following link.

Comments Off on Battle of Glen Shiel

Posted in Anniversary, Exploration, History on Sunday, 30 May 2010 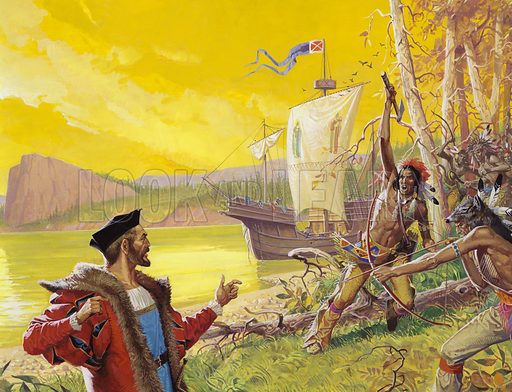 Jacques Cartier, the “Father of Canada”. Illustration by Severino Baraldi

Today is the anniversary of the discovery of the St. Lawrence by mariner and explorer Jacques Cartier, whose expeditions around and up the river earned him the title The Father of Canada. Cartier was convinced that he could discover a north west gateway to China; instead, on 9 June 1534, he reached – and mapped – the shores of the Gulf of St. Lawrence. Cartier misinterpreted the locals description of their village, or kanata, to be the name of the land, and named the area Canada and the inhabitants Canadiens.

Further pictures of Jacques Cartier and his early explorations can be found here. Many more aspects of Canada’s history can be explored through the following link.

Comments Off on Jacques Cartier discovers the St. Lawrence River

The death of Emperor Nero 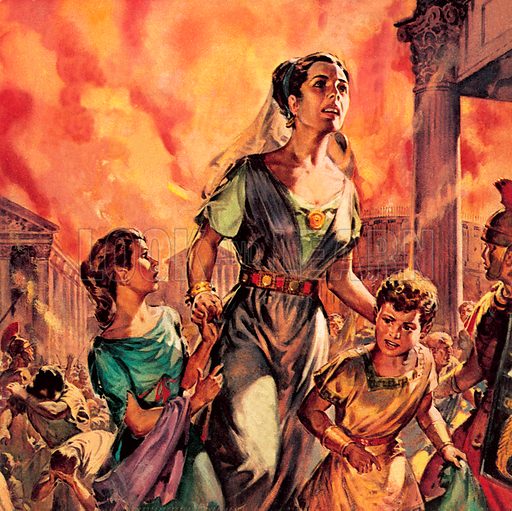 The Great Fire of Rome, illustrated by James E. McConnell

9 June is the anniversary of the death of the Roman Emperor Nero, famously said to have fiddled while Rome burned, although the fiddle did not exist in 1st century Rome. After becoming Emperor in 54 AD, Nero proved to be a tyrant, also known for his extravagance; he also promoted trade and diplomacy, built theatres and promoted athletics.

Nero faced rebellion over his tax policies and lost control of Rome as his friends and even guards abandoned him. He committed suicide in 66 AD.

A bust of Nero

More pictures of Nero and the Great Fire of Rome can be found here. A great many more images of ancient Rome can be seen by following this link.

Comments Off on The death of Emperor Nero 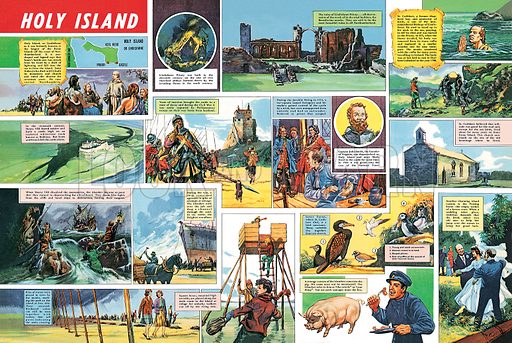 A history of Holy Island, illustrated by Gerry Embleton

8 June marks the anniversary of the Viking invasion of the Holy Island at Lindisfarne, a tidal island off the coast of Northumbria near Berwick upon Tweed. In 793, the Vikings raided Lindisfarne Priory, heralded, according to the Anglo-Saxon Chronicles, by foreboding omens: “There were excessive whirlwinds, lightning storms, and fiery dragons were seen flying in the sky.” 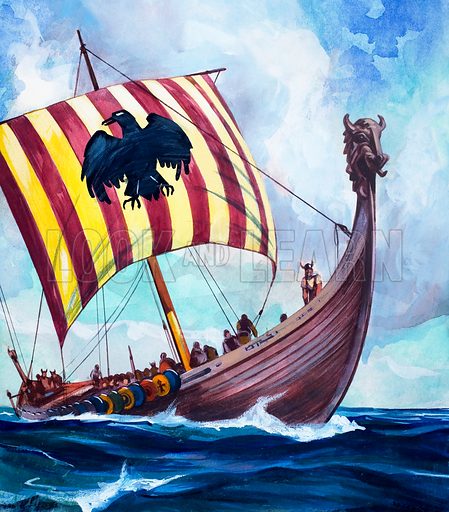 For more pictures relating to Holy Island, follow this link. Many more illustrations relating to Vikings can be found at the Look and Learn picture library.

Posted in Anniversary, Aviation on Saturday, 29 May 2010 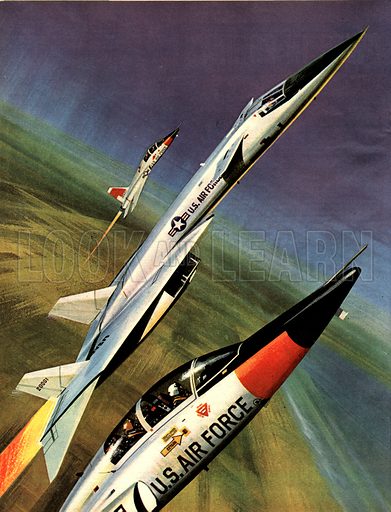 Valkyrie XB-40 on a test flight. Illustration by Wilf Hardy

On 8 June 1966, during a flight and photoshoot, one of two prototype Valkyrie XB-70 bombers flying in formation over California was struck by an F-104 Starfighter and crashed, killing two test pilots. The third pilot was able to eject to safety. Although it performed supersonic test flights at three times the speed of sound, the Valkyrie never went into production.

The second prototype is on public display at the National Museum of the United States Air Force.

More pictures of the Valkyrie and its mythical namesakes can be found here. Artist WIlf Hardy’s aircraft paintings are known around the world and many more can be seen at the following link.

Comments Off on The Valkyrie XB-70 disaster 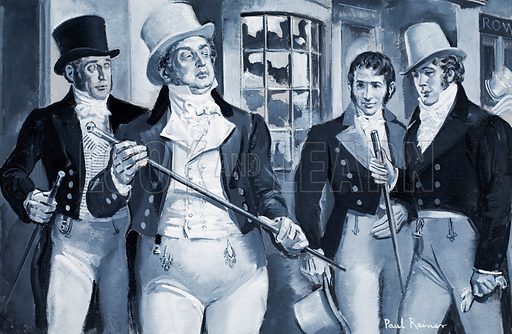 The most fashionable gentleman of Regency England was born on 7 June 1778. George Bryan ‘Beau’ Brummell was not especially rich but could boast the Prince Regent, the future King George IV, amongst his friends. He lived in Mayfair, dressed elegantly and gambled extravagantly. After a rift developed and the Prince Regent snubbed him one evening, Brummell famously asked Lord Alvanley, “Who’s your fat friend?”, an incident celebrated in the above picture by Paul Rainer.

Comments Off on Birth of Beau Brummell

The siege of Jerusalem

Posted in Anniversary, Famous battles, History, Religion on Friday, 28 May 2010 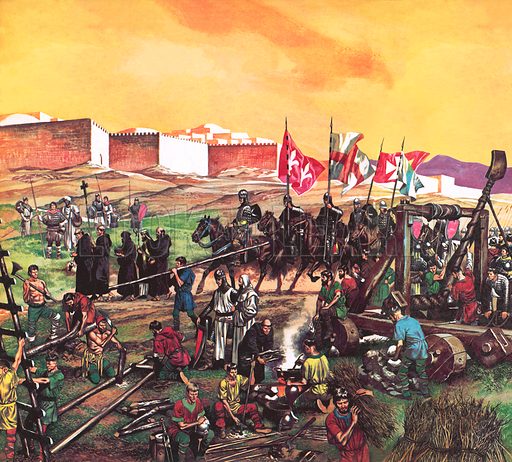 7 June is the anniversary of the beginning of the siege of Jerusalem during the First Crusade. The Crusaders besieged the city for five weeks over June and July 1099 before finally capturing the city from the Fatimid governor Iftikhar ad-Daula. The besiegers suffered as greatly as the besieged as they lacked food and water, which was available in the city.

More pictures of the siege of Jerusalem can  be found here. A wider range of images relating to the Crusades can be seen by following this link.

Comments Off on The siege of Jerusalem

Posted in Anniversary, Famous battles, World War 2 on Thursday, 27 May 2010 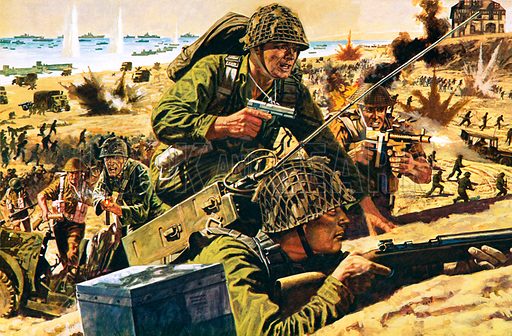 Troops land on the Normandy beaches on D-Day

6 June is the anniversary of D-Day and the landing of Allied forces on the beaches of Normandy, France, officially known as Operation Overlord. In 1944, a series of bombing raids covered the arrival of parachute and glider forces overnight; at 6.30am, the first of the Allied forces from Britain, America, Canada, Poland, the Free French and soldiers from other nations landed. Over 175,000 troops landed that day on a 50-mile stretch of coast.

More pictures from the D-Day landings can be found here. Follow this link if you would like to view many more images relating to World War Two.

Comments Off on D-Day

Posted in Anniversary, Famous battles on Thursday, 27 May 2010 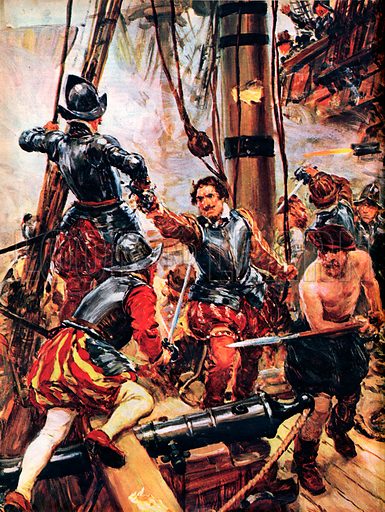 On the anniversary of his birth, we celebrate the remarkable courage of Sir Richard Grenville. Sir Richard was a vice-admiral in the British Navy assigned to waylay Spanish treasure ships. On 6 June 1591 he faced a force of 53 Spanish vessels but, rather than escape, he chose to face them. His ship, HMS Revenge, was surrounded by the superior Spanish forces, but Grenville was able to severely damage 15 of them before his crew surrendered (against Grenville’s wishes – he wanted to blow up his ship). Wounded, Grenville died several days later. 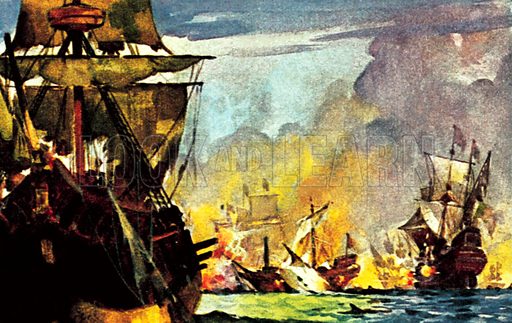 More pictures of Sir Richard Grenville and his epic battle can be found here. For many more images of battles at sea follow this link.

Comments Off on Birthday of Sir Richard Grenville