The Medina of Marrakesh 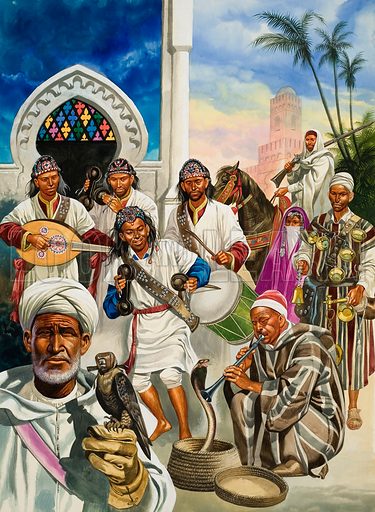 The dancers spin around on their toes and leap into the air. Faster and faster they dance, and their white robes fly out in all directions. The clash of iron cymbals and the insistent beat of the drum become louder and louder. One by one the dancers fall exhausted to the sand and lie there motionless.

These are the “gnaous”, negro dancers from Central Africa. In another part of the immense square a young girl is dancing to the beat of a guedra, a drum made from a pottery vase with goatskin stretched over its mouth. She is completely covered in a black robe and wears an enormous shawl of brilliant blue.

In yet another part of the square, a man with long hair wearing a long woollen robe or “djellaba” squats on the ground. A small crowd gathers and watches as he reaches into a basket and pulls out a cobra with his bare hands. The man and the snake stare at one another steadily for what seems like hours.

END_OF_DOCUMENT_TOKEN_TO_BE_REPLACED

Comments Off on The Medina of Marrakesh 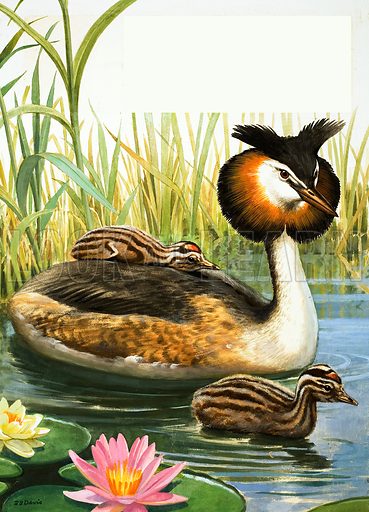 The Great Crested Grebe by R B Davis

With so many of our native birds declining in numbers and some even disappearing altogether, it is good to know [ie in 1973] that at least one species is on the increase. One hundred years ago the Great Crested Grebe was in danger of extinction, chiefly because it was the fashion in Victorian times for ladies to wear hats that had been trimmed with grebe “fur.” Towards the end of the last century the number of breeding pairs of these birds was estimated at less than 50. Today, nearly every large sheet of fresh water supports at least one pair of these attractive birds.

END_OF_DOCUMENT_TOKEN_TO_BE_REPLACED

Comments Off on The Great Crested Grebe 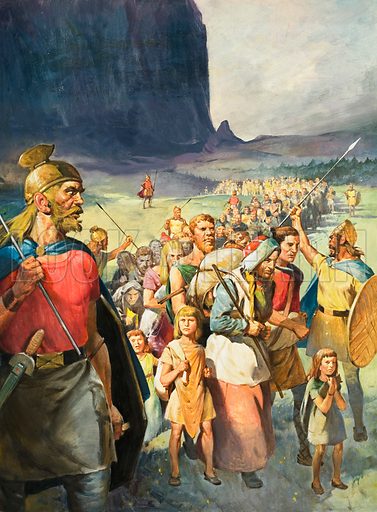 The region that stretches across the central part of Europe and which is bordered by the Rivers Rhine and Oder was once inhabited by a people of Scandinavian origin. These Germanic tribes had been chased out of their homeland by enemy tribes towards the end of the 2nd century BC, and had moved towards the South along the banks of the North Sea where they began to settle. This area, the central part of Europe, became known as Germania, named after the people who inhabited the region.

The first of these Germanic tribes whom the Romans encountered were the Cimbri and the Teutoni who, in the year 113 BC, defeated the Romans near Noreia, the capital of Noricum. The ferocious-looking barbarians were greater in number than the Roman army and soon after the fighting had begun they began to slaughter the Roman soldiers on all sides.

END_OF_DOCUMENT_TOKEN_TO_BE_REPLACED

Comments Off on The Germans

Shall we drink icebergs? 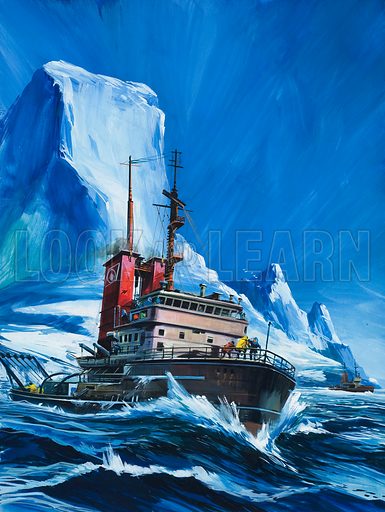 Scientists in the Arctic and Antarctic are making some exciting discoveries about the history and structure of the Earth’s icecaps. Now [ie 1973] some of them are studying plans to make use of these frozen assets by towing icebergs to drought-stricken areas to provide water.

In 1957 a scientist at the Scripps Institute of Oceanography at La Jolla, California, proposed a scheme to float a 20 mile long chain of icebergs from the Antarctic to the southern Californian coast to provide fresh water to a dry, over-populated region.

The idea was pooh-poohed as a piece of nonsense. But today [ie 1973] the proposal is being studied again not just by the Scripps Institute but also by the US National Science Foundation and the Rand Corporation.

END_OF_DOCUMENT_TOKEN_TO_BE_REPLACED

Comments Off on Shall we drink icebergs? 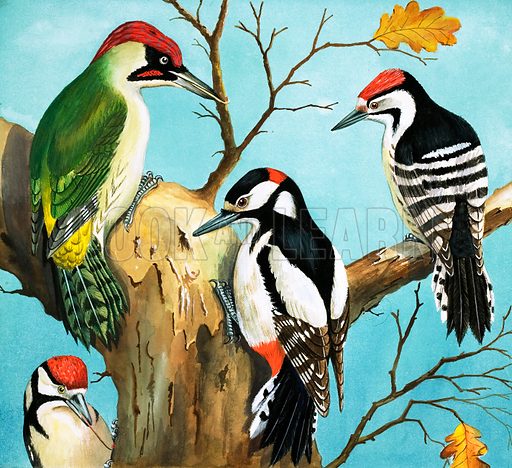 If you take a walk in the woods and keep very quiet, you may be able to eavesdrop on a strange and secret conversation. As you pause among the trees, you may hear a tapping sound made so rapidly that it seems like a roll of drums. This will be the Pied Woodpecker, or Greater Spotted Woodpecker as it is also known, communicating with another woodpecker, who may be a considerable distance away. This bush telegraph is worked by the bird’s striking the trunk of a tree with its beak with great rapidity.

END_OF_DOCUMENT_TOKEN_TO_BE_REPLACED

Comments Off on The Pied Woodpecker

The return of Excalibur 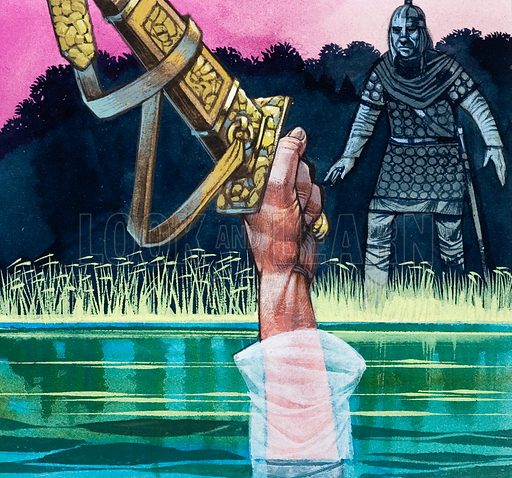 “Sir Bedivere,” the dying King Arthur said, “My sword was given to me by the Lady of the Lake. Now it must be returned to the water from whence it came.” So Bedivere took the sword to the water but when it came to it he could not bring himself to cast it from him. So he hid the sword Excalibur and went back to Arthur saying he had got rid of the sword. But the king knew that he was lying and sent him off again so Sir Bedivere returned to the lake and took the sword from its hiding place and threw it into the water. To his wonder he saw a hand reach up from the depths to catch the sword. After waving it three times the hand disappeared slowly beneath the waters.

Comments Off on The return of Excalibur 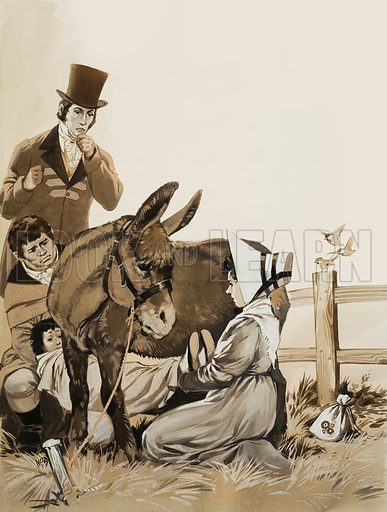 In 1827 the painter, John Constable, was concerned about the health of his young son who was suffering from whooping cough. One quack recommended as a cure that the child be “passed three times over and three times under a donkey.”

Comments Off on Three times over and three times under 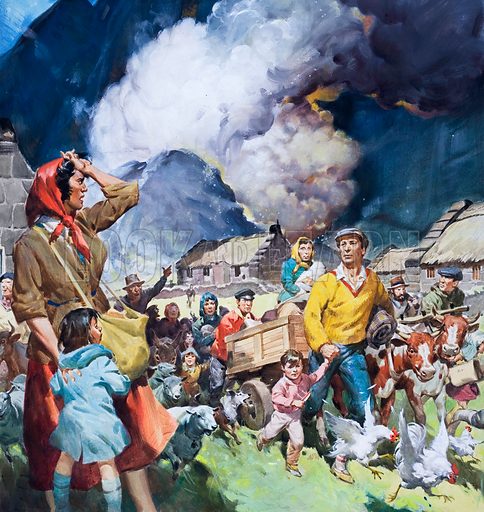 From the depths of lonely Tristan da Cunha island in the south Atlantic a volcano thrust a sea of molten lava over the harsh land and began a story of upheaval and hardship that the world will never forget.

The islanders knew that a giant lay sleeping under Tristan da Cunha. The immense black cone of the extinct volcano which towered over the island was as familiar to them as it had been to the mariners who for centuries had sailed that deserted region of the South Atlantic.

Then, on an October morning in 1961, the giant began to stir. Far to the north, people were expecting winter, but here it was spring. The sun shone in a clear blue sky and a warm wind blew in from the sea. The islanders were just leaving their small village to plant potatoes and tend their sheep.

Suddenly they heard a sound like the howling of a thousand hurricanes. The ground trembled and shook under their feet and huge chasms opened in the rocky ground. The islanders turned and ran back to the village as stones and showers of earth rained down on them.

END_OF_DOCUMENT_TOKEN_TO_BE_REPLACED

Comments Off on Tristan da Cunha 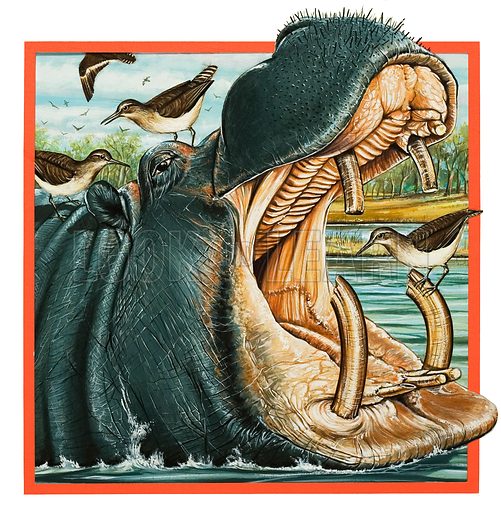 This fine picture of a hippopotamus, having its teeth cleaned by egrets, was used on the cover of an issue of Look and Learn in 1979.

Comments Off on Hippopotamus 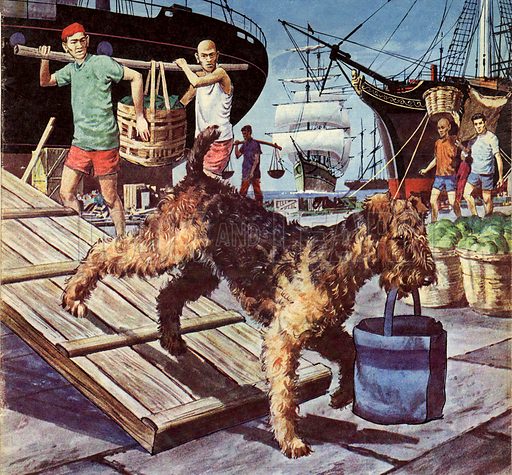 Owney the mongrel was adopted by the staff of the Albany Post Office in New York and rode Post Office trucks until he had visited every state in the Union. In 1895 he boarded the SS Victoria and set off around the world.

This picture is by Barrie Linklater.