Tortoise in the rain 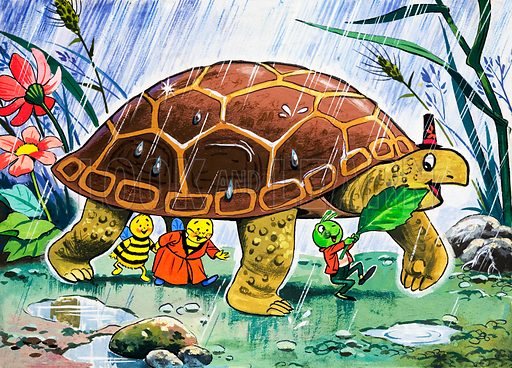 Comments Off on Tortoise in the rain

Men in the rain 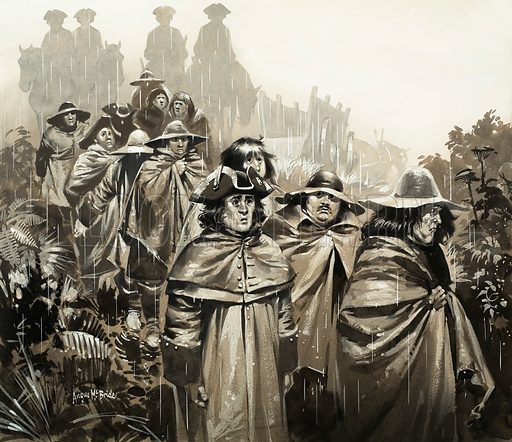 A particularly “damp” picture by Angus McBride, selected as a further comment on the current British weather.

Comments Off on Men in the rain 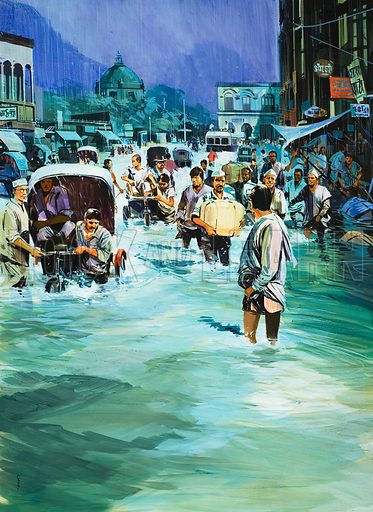 As the UK is hit by torrential rains, here — for its similarities — is a picture of an Indian monsoon, by Gerry Wood who was one of Look and Learn‘s main illustrators during the final years of the magazine.

Comments Off on Indian monsoon 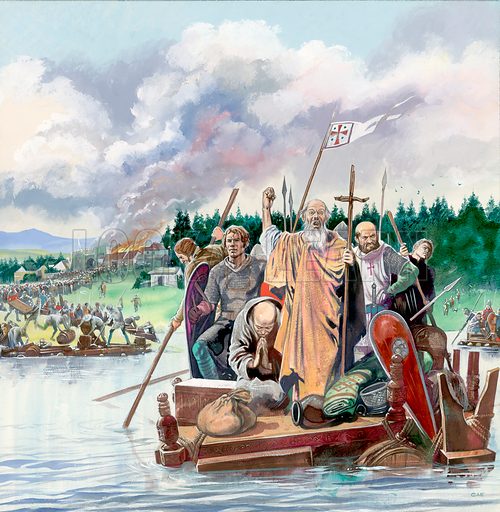 From the earliest centuries of Christianity, Palestine had been the goal of pilgrims from the West. Jerusalem fell into the hands of Arab Moslems in the 7th century, but there continued a spirit of tolerance between them and the thousands of pilgrims who annually flooded into the city. The pilgrims needed to be fed, transported and housed, and the Arabs in Jerusalem drew a comfortable income from the provision of these humdrum needs.

Then, in the late 9th century, the Turks, Moslems themselves, drove out the Arabs and a new era began. Fiercer and more fanatical than their predecessors, the Turks destroyed the profitable tolerance that had existed. Persecution and extortion began and returning pilgrims brought bitter tales of the indignities to which they had been subjected.

END_OF_DOCUMENT_TOKEN_TO_BE_REPLACED

Comments Off on The First Crusade 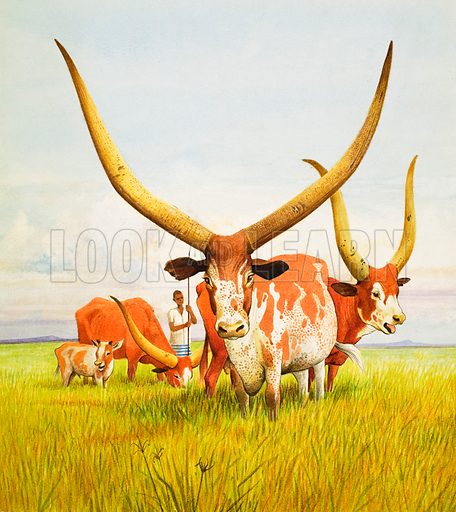 These magnificent long-horned cattle belong to the Bahima herdsmen of Uganda. To these herdsmen the cattle mean practically everything, supplying them with meat, milk and hides, the latter being cured and used for a great many domestic purposes.
The cattle are also held sacred by the Bahimas, and are regarded as the living religious symbol of their god. Not only this: a man’s social standing is relative to the number of cattle he owns.

By tradition, each animal is given a name. usually with some reference to its colour and markings. It is said that the animals know their own names and will answer to them when called.

END_OF_DOCUMENT_TOKEN_TO_BE_REPLACED

Comments Off on The longest horns 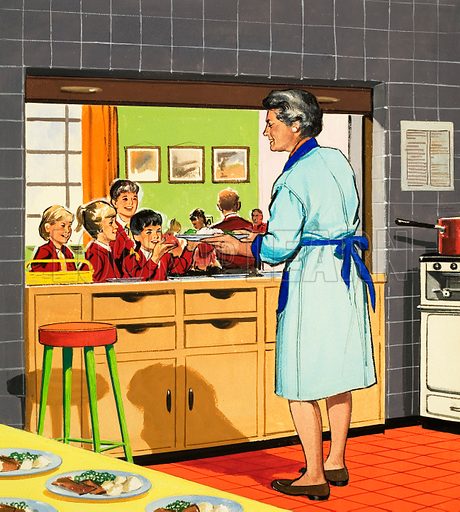 This evocative picture is from the series ‘People You See’ which appeared in Teddy Bear magazine in the early 1960s.

Comments Off on The school dinner lady

The picture of Anne of Cleves 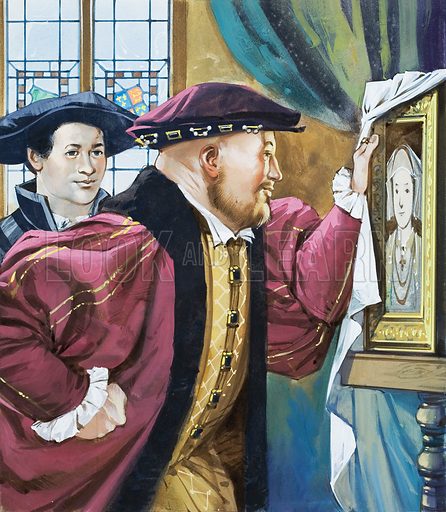 Holbein was sent by Henry VIII to paint the young Princess Anne of Cleves, whom the King had never seen but thought he would like to marry. This picture is by Angus McBride. Below is a picture by Peter Jackson of the same subject.

END_OF_DOCUMENT_TOKEN_TO_BE_REPLACED

Comments Off on The picture of Anne of Cleves 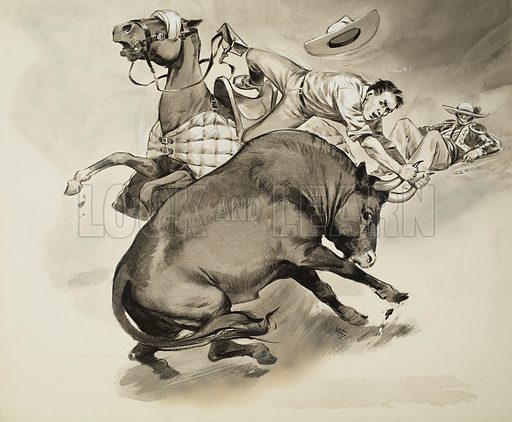 The young explorer Fred Walker had taken an instant dislike to bull-fighting. And he did not let the matter rest. Leaping into the arena, he determined to make an unforgettable protest. An action-filled picture by Angus McBride.

Comments Off on Bull fighting protest 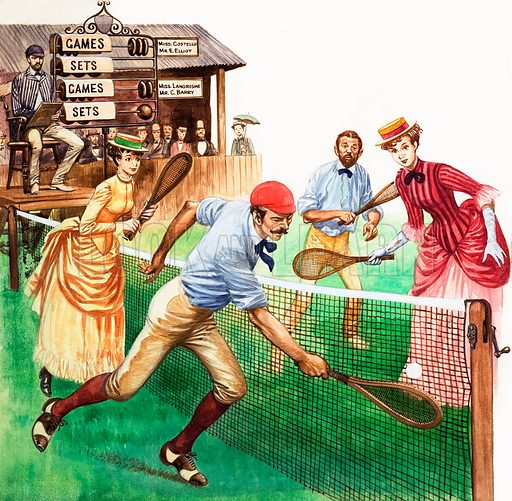 In honour of Wimbledon, here are two tennis pictures from our archive. Above an old game of mixed doubles, and below a newer (ie 1960s) game of men’s singles.

END_OF_DOCUMENT_TOKEN_TO_BE_REPLACED

Comments Off on Tennis – old and new

Corinth – Citadel at the Crossroads 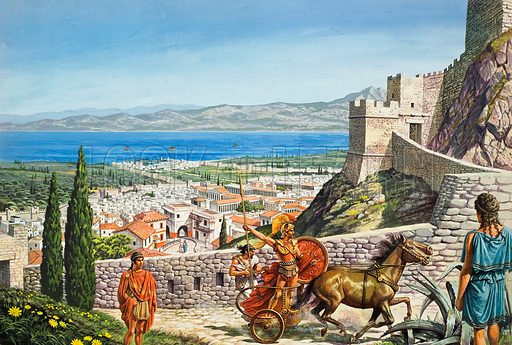 Dominating the narrow land passage between the Peleponnese and mainland Greece, and controlling the crossing of ships over the isthmus, Corinth became rich and powerful. A fine classical illustration by Roger Payne.

Comments Off on Corinth – Citadel at the Crossroads