This edited article about the USS Nautilus first appeared in Look and Learn issue number 584 published on 24 March 1973. 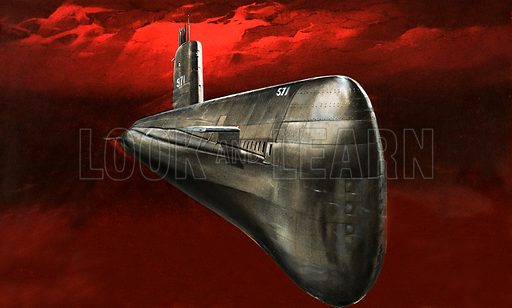 In 1870 Jules Verne wrote about a mighty submarine that could cruise thousands of leagues under the sea. He called it the Nautilus.

On January 21st, 1954, at a Connecticut shipyard the dream of Jules Verne came true. As Mrs Eisenhower smashed a bottle of champagne against the dark green hull of the Nautilus, the world’s first atom-powered submarine slid into the water.

Nautilus is 300 feet long, displaces 3,000 tons and cost £10 ½ million to build. Her atomic power can carry her round the world without refuelling.

And her speed is in excess of 20 knots.

When the cheers of the launching ceremony died away Nautilus went to work. Soon she was breaking records and in 1957 came a voyage of exploration as exciting as any that man has known.

The brief of her captain, Commander William Anderson, was to explore beneath the ice packs of the North Pole. The rasp of the diving alarm sounded and for the first time Nautilus edged under the ice.

Somewhere in the ship a juke-box was playing. Off-duty members of the crew relaxed in their almost luxurious quarters.

In the mess another group were eating dinner. Meanwhile in the control room, Commander Anderson wondered what they would find below the ice.

It wasn’t long before the answers to questions that had been puzzling scientists for many years began to arrive. By means of a sonar machine scientists on board were able to form a very good picture of what the ice overhead was like.

A sonar machine is a device that picks up sound and so enables the navigator to detect the presence of any objects outside his ship. This he does by listening for the echo made by an object in the path of a beam of sound.

First they found that it was a huge, ever-moving mass of varying thickness. It was made up of floes ranging from a few feet to ten or twelve feet but not often more.

The North Pole ice-pack is interspersed here and there with small lakes, little more than cracks in the surface.

After cruising for some time beneath the surface Commander Anderson decided to attempt to bring Nautilus to the surface in one of these cracks.

It was, as he put it, rather like “threading a needle.” END_OF_DOCUMENT_TOKEN_TO_BE_REPLACED

Comments Off on USS Nautilus

This unusual picture captures one of the most significant moments in the development of photography, when in 1826 r 1827 the French inventor, Joseph Nicephore Niepce, finally captured a permanent photographic image in the specially designed ‘camera’ shown in the illustration.

Many more pictures of inventions can be found at the Look and Learn picture library.

Comments Off on Joseph Nicephore Niepce

Mars, colonised by man, as envisaged in the 1980s

This is an elaborate illustration of a science fiction scenario – the human colonisation of Mars. The picture has many reasonable elements, like the dome-shaped structures, but beneath them appear to be something akin to the pyramids, which is rather amusing and fanciful. Our overall impression is of the pervasive pinkness of the Red Planet.

Mars, colonised by man, as envisaged in the 1980s

Comments Off on Mars, colonised by man, as envisaged in the 1980s

A Picture Palace of Edwardian Times

This striking and historically accurate picture shows the sensational screening of the Lumiere film, L’Arrivee d’un Train A la Ciotat at the Regent Street Polytechnic in London. It is a perfect pictorial representation of one of the famous films and great moments in the early history of cinema.

A Picture Palace of Edwardian Times by Peter Jackson

Many more pictures of cinema can be found at the Look and Learn picture library.

Comments Off on A Picture Palace of Edwardian Times

Family playing on the moon, as imagined in the 1960s

This amusing picture shows a family playing on the moon above a valley where sits their lunar base. The extra-terrestrial domestic scene was imagined in the 1960s, when a rather naive optimism began to shine through after the post-war gloom; it was of course a decade which saw man walk on the Moon. But however unlikely this vision of a lunar colony may have appeared, the artist did get one thing right; he painted the Earth as a “blue planet”.

Family playing on the moon, as imagined in the 1960s

Comments Off on Family playing on the moon, as imagined in the 1960s

This informal portrait of Louis Daguerre cleverly shows the scenic artist and pioneering photographer with the subject of a world-famous photographic image made by him in 1838. The view from his window seen in colour in this picture, became a black and white photograph of the boulevard which fortuitously captured the first ever human forms in a photographic image: the bootblack polishing a man’s shoes on the pavement corner on the left.

Many more pictures of inventions can be found at the Look and Learn picture library.

Comments Off on Louis Daguerre the inventive photographer

An early film being made

This fascinating picture shows an early film director shouting instructions to his actors with a megaphone, something perfectly possible during the Silent Era when no sounds were recorded. His cameraman carefully swivels the camera on its tripod, training the lens on the ultimately silent histrionics. The well-observed light reflector is a realistic touch, along with the theatrical two-dimensional set and the iconic director’s chair.

An early film being made by Peter Jackson

Many more pictures of the cinema can be found at the Look and Learn picture library.

Comments Off on An early film being made

The bombing of Hiroshima

Our panoramic picture shows one of the most famous images in world history, the notorious fireball and column of radioactive dust after the bombing of Hiroshima. We also see the Enola Gray which dropped the bomb, and one of the planes carrying scientific instruments to monitor the event. Our viewpoint is that of the observer in the third plane, the photography aircraft.

Many more pictures of the Second World War can be found at the Look and Learn picture library.

Comments Off on The bombing of Hiroshima

Men working on Mars, as imagined in the 1970s

This convincing photorealist and futuristic picture shows astronauts working on the Red Planet in a small scientific base. They have carefully organised equipment and credible scientific instruments, but their controversial achievement appears to be successfully cultivating food crops on Mars.

Men working on the planet Mars, as imagined in the 1970s

Comments Off on Men working on Mars, as imagined in the 1970s

The best pictures from ‘The Illustrated Times’, 69

We have selected three of the best pictures from ‘The Illustrated Times’, a nineteenth-century illustrated newspaper and rich source of remarkable engravings.
The first picture shows Messrs Glass and Ellioti’s Atlantic Telegraph Cable Works at East Greenwich. 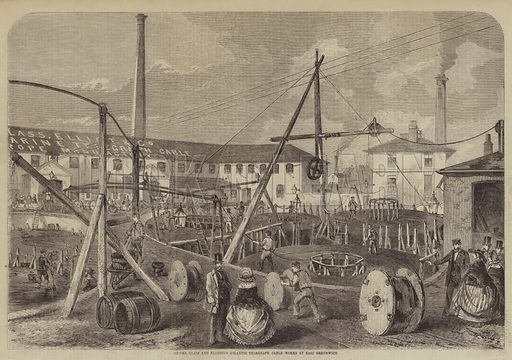 The second picture shows a Buddhist Chapel erected by the Chinese in San Francisco.

Buddhist Chapel erected by the Chinese at San Francisco

High-resolution scans of all the illustrations from ‘The Illustrated Times’ (London 1855-1866) can be found in the Look and Learn picture library.

Comments Off on The best pictures from ‘The Illustrated Times’, 69