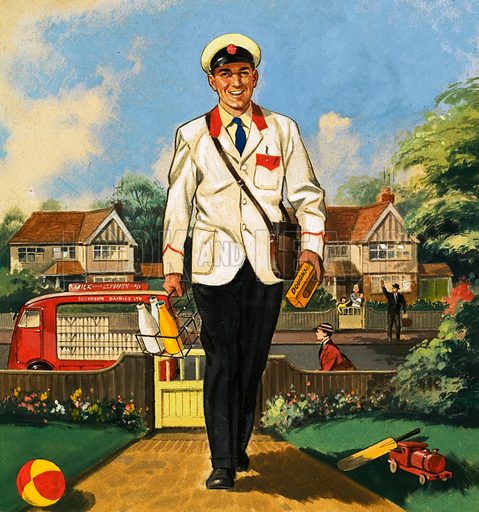 In England, the seventeenth century saw glass bottles replacing stoneware and traditional leather bottles, especially for wine. Wine bottles were often marked with a prunt or seal – a misleading term because this did not seal the bottle in the ordinary sense, but was a glass circle applied to the shoulder of the bottle, with the owner’s initials or badge moulded in it. END_OF_DOCUMENT_TOKEN_TO_BE_REPLACED

Comments Off on The glass bottle 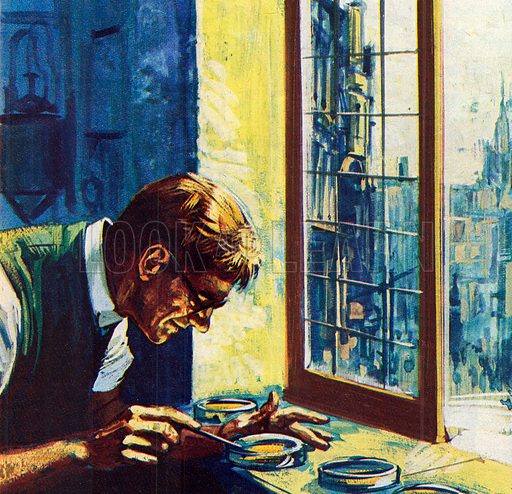 Alexander Fleming in his laboratory

In 1928 a Scottish doctor named Alexander Fleming was growing bacteria for investigation in little glass dishes in a room in his hospital by Paddington railway station in London. Microscopic mould spores drifted in through the window and settled in one of the dishes while the lid was off it for examination. Round where the mould grew in the dish, the bacteria appeared to be killed off.

The dishes in which bacteria were cultured often became spoiled or contaminated, and would then be thrown away as useless. But in this case Fleming, in a historic moment of curiosity and fortune, decided to cultivate the mould and investigate it. He found it was producing a substance which attacked bacteria. The substance he named penicillin (after the scientific name of the mould). Thus was discovered one of the most powerful drugs that man has ever found.

But it was another 13 years before penicillin was produced in a way which could be used to cure disease.

Back in the 1920s, there were two ways of treating infections. One was by vaccination: this assists the body’s natural defence against bacteria to fight off an infection. This method is known as immunisation, and though of great value for certain diseases, its effectiveness is limited. END_OF_DOCUMENT_TOKEN_TO_BE_REPLACED

Comments Off on “Flem’s mouldy fluid”

This edited article about Wilhelm Rontgen and X-rays originally appeared in Look and Learn issue number 793 published on 26th March 1977.

Professor Wilhelm Rontgen and the all-seeing eye by Wilf Hardy

Professor Wilhelm Rontgen, a physicist at Wurzburg in Bavaria, leaned over the tube he was experimenting on and carefully covered it completely with black paper.

He had been working all day in his laboratory, and now it was late in the evening and getting dark. The tube he had covered so that no light could escape from it was called a Crookes tube, through which cathode rays are passed.

Rontgen, straightening up for a moment, saw before him in the gathering gloom, an extraordinary sight. Several yards away from him was a piece of cardboard he had been using in another experiment. The cardboard had been coated with a chemical which glows when light falls upon it. There was at that moment scarely any light at all in the laboratory, yet –

The cardboard was glowing!

Rontgen stared in disbelief. This was no ordinary light: it was bright green. But where was it coming from?

The only possible source of light in the laboratory was the Crookes tube, which he had just covered with black paper. Now Rontgen groped towards the tube and switched off the electricity supply to it. At once the green light from the cardboard went out.

When he switched it on again, the ghostly green light reappeared.

Puzzled, Rontgen held his hand between the tube and the cardboard screen. To his astonishment, the invisible rays of light which were apparently passing through the black paper, now passed right through his hand and cast a shadow of his bones upon the cardboard.

Rontgen had so little idea of what these rays were that he named them X-rays. END_OF_DOCUMENT_TOKEN_TO_BE_REPLACED

Comments Off on Discovery of X-rays

We have selected three of the best pictures from our large collection of 19th and early 20th century educational trade cards.
The first picture shows a quack medicine seller at a fair in a small town in Germany, 1820.

A quack medicine seller at a fair in a small town in Germany, 1820

The second picture shows Odin, chief of the Norse gods.

Odin, chief of the Norse gods

Comments Off on The best pictures from educational trade cards, 69

We have selected three of the best pictures from our large collection of 19th and early 20th century educational trade cards.
The first picture shows a laboratory for medical research into bacteria.

The second picture shows Pheidippides bringing news of the victory of the Greeks over the Persians at the Battle of Marathon.

Pheidippides brings news of the victory of the Greeks over the Persians at Marathon, 490 BC

The third picture shows a Gaming room at Monte Carlo.

Comments Off on The best pictures from educational trade cards, 64

We have selected three of the best pictures from our large collection of 19th and early 20th century educational trade cards.
The first picture shows Mehmed the Conqueror, Sultan of the Ottoman Empire.

Mehmed the Conqueror, Sultan of the Ottoman Empire, makes his triumphal entrance into the Hagia Sophia after capturing Constantinople, 1453

The second picture shows Edward Jenner, who discovered a vaccine against smallpox.

Edward Jenner, English doctor and scientist who discovered a vaccine against smallpox

Comments Off on The best pictures from educational trade cards, 36

This intensely moving picture of Edith Cavell shows the famous nurse on ward duty, looking at her patients with a facial expression of compassionate concern and genuine empathy. It is all the more affecting and powerful an image given the fate of this great humanitarian, who was murdered by the Germans on 12 October, 1915.

Many more pictures of the First World War can be found at the Look and Learn picture library.

Comments Off on Nurse Edith Cavell, heroine of the First World War

Ambroise Pare was a diligent military surgeon whose innovative methods improved the lot of the wounded soldier, as seen in this very interesting picture which depicts the key moment in Pare’s career. He ran out of boiling oil to cauterise a soldier’s wound, so had to concoct a potion which on the following day turned out to have greater healing properties than expected, and many more than the brutal simplicity of cauterisation.

Ambroise Pare, military surgeon, when the oil ran out

Many more pictures of medicine can be found at the Look and Learn picture library.

Comments Off on Ambroise Pare, the French king’s surgeon

This very unusual picture is a remarkable depiction of the notorious London smog which was a lethal health hazard and a phenomenon of pollution, not an example of the famously bad English weather. A pedestrian is coughing, vehicles are spewing out their fumes and visibility is poor, while the overall colour matches the famous moniker for the London smog, namely “a pea-souper”.

Many more pictures of London can be found at the Look and Learn picture library.

Comments Off on London Smog in 1952

Dr Barnard, the South African cardiac surgeon, and the first heart-transplant patient, Louis Washkansky, made news headlines after the success of the pioneering operation in December 1967. The era’s taste for glamour and fame added to Christiaan Barnard’s international celebrity, despite Washansky’s death from pneumonia 18 days later.

Many more pictures of medicine can be found at the Look and Learn picture library.

Comments Off on Dr Barnard and the first heart-transplant patient