Posted in Bravery, Famous crimes, Historical articles on Monday, 16 May 2011 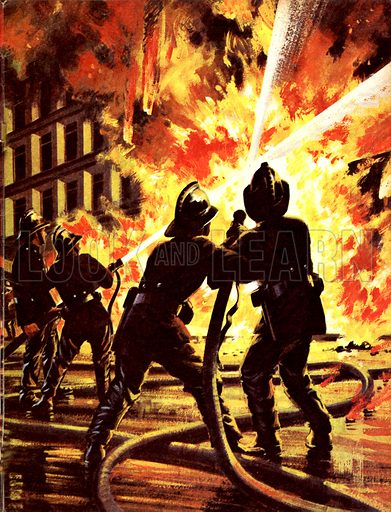 “Leopold Harris, you were the head and front of this conspiracy, and I have no doubt that you made enormous sums of money out of it . . . The sentence of this court upon you is that you be kept in penal servitude for fourteen years.”

With these words, pronounced in the sombre setting of the Old Bailey, Mr Justice Humphreys brought to a close a case which, in the year 1933, had deeply shocked the British public.

Leopold Harris was a claims assessor. His job was to advise persons or firms who had suffered loss, especially by fire, in making claims for insurance.

He had inherited the business from his father, and the fees he earned brought him a handsome income; but Harris lived extravagantly. At some time during the 1920s he decided he needed to make more money – and make it quickly.

If someone insures against fire, he makes a yearly payment, called a premium, to an insurance (or assurance) company, or to underwriters at Lloyd’s. If no fire occurs, he is naturally happy; and the insurance company is content, too, as it has received its premiums.

When there is a fire, the insurance company is expected to pay for any loss suffered. It is the business of the claims assessor to get as large a payment for his client as possible. As Harris had good standing in the insurance world, he was generally successful in this.

From time to time there have been cases of businessmen, whose firms have being doing badly, deliberately setting fire to their premises for the sake of the insurance money. Harris’s audacious plan was to invest money in a whole series of businesses – not in his own name – insure them for very much more than they were worth, and have them set on fire.

As a respected assessor, he was confident that he would have no difficulty in getting substantial insurance payments. Having done so, he would pay generous amounts to the accomplices who set up the firms – but he would, of course, keep the biggest share of the money for himself.

Most of the bogus firms he set up were supposed to be engaged in wholesale trades such as textiles or stationery – dealing in goods that would readily burn. Harris would recruit two or three crooks to hire premises and organise the firm.

The next step was to buy the stock. This consisted generally of damaged goods, often recovered from other fires. Harris had a brother-in-law, Harry Gould, who ran a firm dealing in cheap goods of this kind. He readily supplied what was necessary – and provided invoices showing prices much higher than they really were.

The next task was to insure the goods and the business – at, of course, a figure many times their real worth. All that remained was to start the fire. The usual method was to set a lighted candle in a nest of inflammable material. The time the candle took to burn down was sufficient for the person lighting it to get well away.

A typical enterprise was the Franco-Italian Silk Company, established in Oxford Street, London, in 1929. The nominal owner was an Italian associate of Harris named Camillo Capsoni. The stocks rooms were filled with rolls of silk, much of it in unsaleable condition, supplied by Gould for £3,000.

Capsoni then took out fire insurance policies amounting in all to ten times that amount. Though little, if any, real business was done, the firm had to survive for several months for the sake of appearances. In the spring of the following year Harris felt that the time had come for action.

It was decided that Capsoni’s wife should start the fire, while Capsoni travelled to Birmingham to establish an alibi. The fire duly took place, and, though the fire brigade saved the building, much of the stock was destroyed.

Harris quickly arrived on the scene to offer his services as assessor. He had little difficulty in securing over £20,000 from the insurers – being very much helped by the fact that the insurers’ own assessor, Adam Loughborough Ball, was in Harris’s pay.

It seems that one of Harris’s more sinister gifts was his ability to persuade those he dealt with to become his corrupt accomplices. Among those who accepted his bribes was Captain Miles, commander of the London Salvage Corps. This body, acting on behalf of insurance firms, has the duty of inspecting premises and goods after fires have taken place, and trying to minimise the amount of damage done.

Miles was of invaluable assistance to Harris. He provided immediate notice of any fires in London, so that Harris could get to the scene before any other assessors. In addition, he was in a unique position to cover up the falsification of evidence where fraudulent claims were being made.

The eventual downfall of Leopold Harris was due largely to one man, William Crocker (later Sir William), a solicitor with long experience of insurance matters. Acting on behalf of the insurance companies and underwriters, he conducted an undercover investigation into fire claims about which doubts were felt.

As he patiently built up a dossier, Crocker was struck by the frequency with which Harris’s name cropped up in connection with dubious cases of this kind. For a long time there was no solid evidence; but finally one of Harris’s own gang gave him confirmation of Crocker’s suspicions.

Camillo Capsoni had quarrelled with Harris and left his gang. He decided to “go straight” – and at the same time to obtain revenge for grievances against his former accomplices.

He approached an insurance company and was passed on to Crocker. Armed with Capsoni’s evidence, and that which he had himself assembled, the solicitor contacted the police. For Harris, Gould, Miles and all the others who were caught up in this web of fraud, the day of reckoning had come at last.