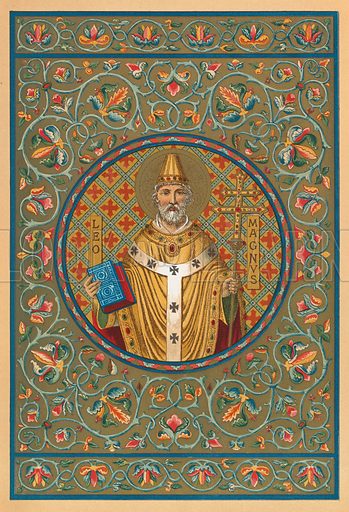 Pope Leo IX (1002 – 1054) was a German aristocrat related to the ruling Imperial family of Emperor Conrad II. He was selected as Pope in 1048 but insisted on travelling to Rome for a free canonical election, which took place in 1049. He was endorsed by Abbot Hugh of Cluny and was accompanied by him and the young monk Hildebrand, later Pope Gregory VII, arriving in the city dressed as a humble pilgrim. His papacy was eventful in the many synods over which he presided, and his constant attention to the demands and importance of the priesthood led to a renewal and reaffirmation of celibacy as the central vow of the clergy. He also strongly opposed simony, and was energetic in exposing and punishing corruption. In Italy he was required to help repel the Normans in the south, but his military campaign was defeated and he was taken prisoner, only being freed when he acknowledged the Norman conquest of Apulia and Calabria. Not long after this conflict Leo the Great died; he is regarded as the most influential and distinguished of all the mediaeval German Popes.

Many more pictures relating to Saints can be found at the Look and Learn picture library.