The highwayman had taken off his crêpe mask and the old, dishevelled black wig that he habitually used for robberies, and safely hidden them in his saddle bag. The robbery, just south of Sevenoaks, Kent, had been most successful. The traveller, Lord Ferrers, had been carrying a goodly sum and had handed it over to the highwayman without causing any difficulties. The highwayman would now have to ride through the town of Sevenoaks, but that should pose no problem – there was nothing about him to arouse suspicion. 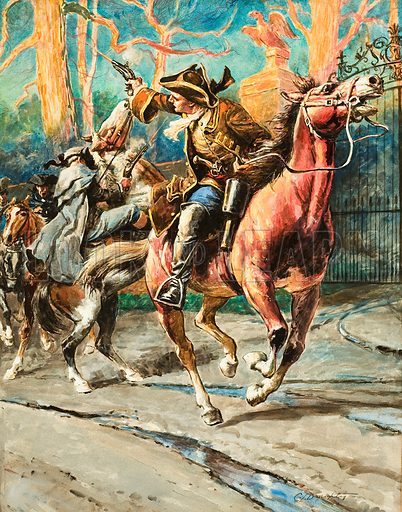 After each of his hold-ups William Page seemed able to spirit himself away – until the next of his daring escapades. His run of success was halted in an attempted robbery on the Great North Road. Illustration by C L Doughty

Scarcely, however, had the highwayman passed through the town, riding at a quiet, steady pace, than he heard the sound of galloping hooves behind him. Turning in his saddle, he was alarmed to see five well-mounted men bearing down on him. Were they after him? Had Lord Ferrers raised the alarm? All such questions faded from his mind as the men began firing their pistols at him.

Fortunately for the highwayman, his pursuers’ shots went wide and, after firing two shots over their heads as a warning, the robber set spurs to his horse and rode off at such a pace that they soon gave up the chase. Once again, William Page, known as the “Master of the Road”, had had a narrow escape from “Jack Ketch” (the nickname the highwayman fraternity habitually gave to the hangman).

No highwayman understood better all the techniques needed to be successful on the High Toby, as the highroads were popularly called. No highwayman possessed greater courage or more steadfast determination. No highwayman was more of a “gentleman of the road”, always courteous towards those he robbed – and certainly no highwayman had more hair-breadth escapes.

William Page was born at Hampton, Middlesex, in 1730, the son of a bargeman who worked on the Thames. The family was poor, living in such utter squalor that, during the Great Frost of 1740, they pitched a tent, alongside countless other Londoners, on the ice-bound River Thames. When the thaw came, many people drowned – including Page’s father. At ten years old, William had to find his own way, and began work.

After various jobs – working at a tavern, apprenticed to an apothecary and then working in a printing house – he became an under-footman to the Earl of Glencairn. It was then that he saw, at first hand, the lavish luxury of the aristocracy, which contrasted so greatly with the dire poverty his family had experienced and which, he felt, had indirectly led to his father’s death.

In his teens, William became personal valet to a wealthy army officer and began to emulate him, often dressing in the captain’s own clothes. The officer took exception to this and James decided it was time to set up on his own. It was just after his 16th birthday that William Page resolved to become a highwayman.

Unfortunately for his plans, Page had no horse and no pistols. Then he heard that a fellow servant was selling a brace of pistols for his master. Page told the servant he knew of a likely purchaser and persuaded him to part with the pistols on a day’s approval. Page then hired a horse from a livery stables and set out for Highgate.

His first robbery was of the Highgate coach itself and, with the money he obtained from the passengers, he bought the pistols. With the proceeds of his next few robberies, he bought a superb mount for himself. William Page was now a fully-fledged highwayman and he set himself to master all the necessary skills.

Page drew up a detailed map of every road within 30 miles of London and with its help was able, seemingly, to vanish after his robberies, foiling all pursuit. As well as a crêpe mask, he would wear an old black wig to further disguise himself. And, later in his long career on the road, he adopted a most novel means of avoiding suspicion. He would drive out from London in a phaeton and pair. When he reached his destination, he would conceal the vehicle and one of the horses, change into riding clothes, don his wig and mask and be ready for the fray.

Afterwards he would return to the phaeton, change clothes again, harness the horse to the traces and set off homeward. It had never been known for highwaymen to use carriages, and thus no suspicion fell on him as he drove through turnpikes, towns and villages.

Despite Page’s gentlemanly behaviour, the highwayman was himself the victim of more violence than any of his fellow high-toby-men.

For many of his robberies, Page worked with a man named Darwell. Once, they rode after two post-chaises on Shooters Hill and were met by a fusillade of shots from the passengers. Fortunately for the highwaymen, the only casualty was Page’s horse, which received a minor wound.

In another assault on a post-chaise, on the Great North Road near Barnet, Page was not so lucky. While Darwell pointed a pistol at the driver, Page rode up to the chaise. The occupant, Lord Downe, leaned out of the window and fired his pistol, the ball striking Page in the shoulder, causing a bad wound. Darwell’s horse reared at the sound of the shot and the driver of the chaise whipped up his horses and made off. This was one of Page’s very few unsuccessful robberies.

It was the famous magistrate Henry Fielding who was instrumental in bringing Page’s career to an end. Three times Page was arrested by Fielding’s men, only to be acquitted when he came to trial. But, in April, 1758, Page’s luck ran out and he was sentenced to be hanged at Penenden Heath, near Maidstone, Kent.

While in gaol, the highwayman heard that a man named Douglas was being held in prison charged with a robbery that Page had, in fact, committed. Immediately, Page made a full confession of the robbery which completely exonerated Douglas. To the last, William Page, the master highwayman, behaved as a true “gentleman of the road”.

Click on a picture to find out more about licensing images for commercial or personal/educational use. We are also able to license textual material. Please contact us for details.