Saint Agnes was one of the very first women revered as a saint by the early church. In fact she was a young girl, a virgin-martyr, who was born to a noble family in Rome around 291 AD. The Prefect Sempronius wanted her to marry his son, but brought up as a Christian, she declined this offer of a Roman marriage. 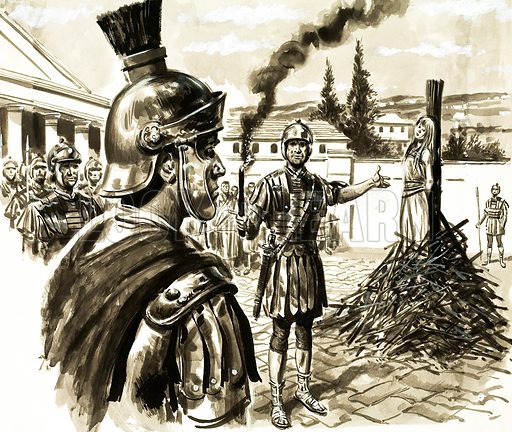 St Agnes about to be martyred at the stake

She was condemned to death for her pains, but since virgins could not be executed, the prefect had her dragged to a local brothel for intensely obvious and despicable purposes. Legend has it she sprouted unattractive body hair to repel her rapists, or that they were struck blind. Either way, after a trial she was taken to the stake to be burned, whereupon the faggots would not take light, or they burned but fell away from her person. Ultimately, a Roman soldier had to decapitate, or in some versions, stab her, thus bring about her martyrdom in the year 304 AD during the reign of the Emperor Diocletian. Her feast day is January 21st, and her name lives on in many place-names, but most memorably in one of the greatest poems in the English canon, The Eve of St Agnes by John Keats.

Many more pictures relating to saints and religion can be found at the Look and Learn picture library. Click on the link or picture to find out more about licensing images for commercial and educational use.