The miracle play was one of three principal dramatic forms which flourished during the middle ages. Less adventurous in subject matter and characterisation than the mystery, the miracle play was  concerned with enacting events and miracles in  the life of a saint or a martyr. 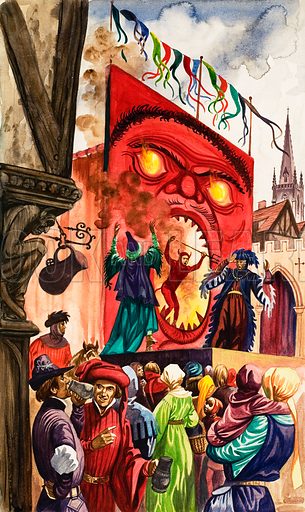 The mouth of Hell, as staged in a miracle play, by Peter Jackson

The form began to flourish a little earlier than the mystery plays, but gradually the subject matter began to move  away from the specific biblical and saintly subject, and incorporated more secular material. The extant examples are mostly centred on the life of the Virgin Mary, and remain more a subject of academic study than scripts reimagined for modern audiences. Like the mysteries, these too were staged with often spectacular effects and colourful noisy exuberance, being directed at the ordinary townsfolk, and of course written and acted in the vernacular. Once again, this literary form strengthened the great sway of the developing English language. Like mystery plays, by which they all but became absorbed, these dramas became obsolete and neglected, and indeed many of them are now lost. This dec;ine was entirely due to the rise of the professional theatre in the early English renaissance.

Many more pictures relating to English theatre can be found at the Look and Learn picture library. Click on the link or picture to find out more about licensing images for commercial and educational use.