This edited article about Panama first appeared in Look and Learn issue number 593 published on 26 May 1973. 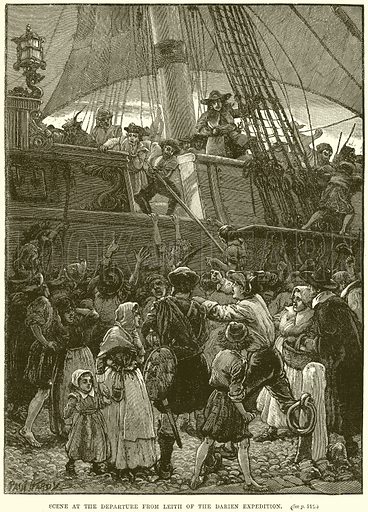 Scene at the departure from Leith of the Darien Expedition

It began to rain, not the rain that the colonists were used to back in their native Scotland, but steady, violent rain, day after day, night after night. Their tropical paradise of Darien on the lovely Isthmus of Panama was about to become a hell on earth.

The steamy, snake-infested swamps bred millions of mosquitoes and soon the colony, 1,200 strong, had lost a quarter of its population. And, as if disease and death were not enough, mutiny was in the air and there were rumours that the Spaniards and the Indians were about to attack New Edinburgh, which meant that their group of rotting shacks, was doomed.

Yet it had all seemed so wonderful to start with. A genius called William Paterson had first conceived the idea of the colony and it was not his fault that it crashed in ruins about him. He had started life as a poor Scots boy, born in 1658, who, when he was 19 had sailed away to the Spanish Main to seek his fortune. Some say he became a buccaneer, but whether he did or not, he certainly made a fortune in Jamaica.

This Scottish youth was extraordinary for two reasons. After next to no education, he grew up to found the Bank of England. It was his idea and he did more than anyone else to carry it through. And he had a unique dream of a peaceful trading colony in Panama. He did not want to kill Indians or fight Spaniards, nor did he want to build an empire. All he wanted was a series of trading ports where ships of all nations could dock, after which their goods could be carried across the Isthmus to the Pacific by wagon, later by canal. They would then be shipped to Japan, China and the East Indies, far more rapidly than the usual route around Africa.

His own poor, backward, much oppressed country, Scotland, seemed unable to support such a scheme. Though it shared a king – William III – with England, it was still independent of her. For the moment he kept dreaming, until the Scottish Parliament eventually passed an act forming The Company of Scotland Trading to Africa and the Indies, Paterson having been called in to give advice. He kept quiet about Darien in case someone got there first.

Now money had to be raised, £400,000, about £10 millions by today’s reckoning. The English refused to help because the all-powerful East India Company objected. So now it was up to the Scots.

Clearly, the task looked impossible, but they did it! Three-quarters of the sum was raised in a month, by nobles, merchants, and shopkeepers. Even the poor, subscribed small sums via their towns. In a fever of excitement the whole nation raised the money for Scotland’s colony, though only the directors of the company knew where it was to be.

It was obvious that Paterson would be in charge, but tragically, he was disgraced. Given £25,000 to buy ships in Germany, he sent £17,000 to a banker friend in London, who ran away with it. He was caught and £9,000 was recovered, but Paterson, the most honest man in a corrupt age where everyone had their hands in the till, was held not guilty but responsible. The missing money was to be deducted from his wages – he could bear that – but he had to hand over power to fools who were scandalously to ruin his scheme.

“Fools” is putting it mildly! Among the trade goods for tropical Darien were vast quantities of thick Scotch cloth and 79 dozen worsted stockings. What were the local Indians, or even the Spaniards, to do with these? And 1,500 Bibles were no help for a colony badly in need of tools and good food. As 23,000 clay pipes, 1,440 Scotch bonnets, and 4,000 periwigs . . .

In 1698, all was ready, and five ships lay in the Firth of Forth. Aboard were 1,200 men, women and children who sailed away with all Scotland wishing them godspeed. After a quiet voyage, marred only by a few rows between the sailors and the colonists, the ships reached a splendid natural harbour in Darien, they called Caledonia Bay.

The Scotsmen got on with the Indians, but not with themselves. Paterson had to watch petty men eternally quarrelling and wrecking his high hopes. Then the English began to sabotage the colony. Hearing about it from a ship’s captain, the Government sent out secret orders that no English seamen in its American colonies and Jamaica should trade with Darien. It was what English merchants wanted, though when the news finally reached Darien, the ban on trade was unofficial because the King did not want to offend his Spanish allies. It was more than a scandalous act of the English; it was a mean, contemptible trick.

But by now few ships of any sort had done much business with the colony. Those that came wanted cash, not the wrong goods. And – another scandal – it was discovered that the Scottish ships were not fit to sail into the north wind and trade for themselves. Needless to say, the Company back in Scotland had been warned by mariners that only “weatherly” ships which could sail close to the wind should be used, but no one had listened.

Then the rains came.

It was some time before the news of the ban on trade leaked out. Meanwhile, the colony had collapsed. The settlers who remained alive sailed away in five ships only one of which ever reached home. The Unicorn, with a half-dead Paterson on board, limped into New York after a terrible ordeal. Most of her crew were so weak that they could hardly raise the anchor. She lost three of her masts in a storm, was leaking badly, and finally, after drifting around the Caribbean and being grounded on the Virginia coast, she reached New York. Some 150 of the 250 people on board had died.

The nightmare continued. A second expedition sailed from Scotland just before news of the first fiasco reached the rejoicing Scots. Reaching deserted shacks and the little fort, its leaders proceeded to make all the same mistakes as their predecessors. After being besieged for a month by the Spanish the survivors were allowed to sail away. None of the Scottish ships reached home.

So ended the Darien disasters, a noble scheme wrecked by dismal planning, disgraceful quarrels and poor leadership after Paterson was demoted. Even he was partly to blame, for he should have guessed why the Spaniards had never tried to colonise Darien – because of the rains and the resulting fever.

Paterson now worked for the union of England and Scotland, which he knew would benefit both, and it came in 1707. The English had the good grace to refund over half of what the Scottish subscribers had lost, 12 wagon loads of gold being taken to Edinburgh from London and escorted by an armed guard of Scottish dragoons.

Paterson had been ruined, but finally the British Parliament made amends, paying him £18,000 in 1714, four years before he died. His countrymen, having failed in Darien, became even better colonists than the English, helping to make the British Empire the greatest the world has ever known. The wiser descendants of the Darien bunglers who had left their homes with such high hopes, proved second to none as soldiers, settlers, explorers and adventurers. So the tragic tale had a happy ending.