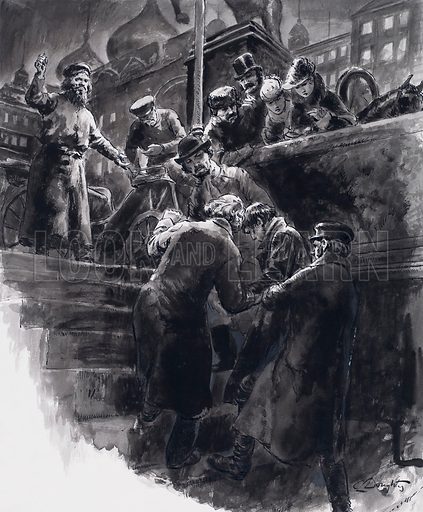 Late night strollers along the banks of the River Neva in Russia were horrified to see a young man standing up to his neck in the river’s icy water. The young man had been married nine weeks previously to a music student. Even on their wedding day he told her he did not love her, and now, bitterly regretting the marriage, he was trying to commit suicide by freezing himself to death. Fortunately the young man was rescued. Fortunately, because he was Peter Tchaikovsky, whose music became possibly the most hummed and danced to of all the great musicians.

Tchaikovsky was an exceptionally sensitive man. He confessed himself to be so timid that meeting strangers gave him intolerable agonies. His life was pitted with nervous breakdowns caused by insignificant worries.

Once when he was conducting an orchestra he imagined that his head would roll off. He became so convinced that this would eventually happen to him that on all future occasions when he was on the rostrum he always held his head with one hand and conducted the orchestra with the other. On another occasion, when he was being decorated for his services to music by the Tsar of Russia, he could only get through the ceremony by heavily drugging himself.

Peter Ilitch Tchaikovsky was born in Votkinsk, Viatka, Russia, on 7 May1840, the son of an army general. He was an absolute master of melody, and though he made free use of familiar Slavonic rhythms on which he built his melodies, his music is highly original and frequently intensely emotional. His orchestration abounds in glorious effects, and two of his symphonies, the Fifth and the “Pathetique” (Sixth) are among the greatest examples of symphonic music. But it is in ballet that Tchaikovsky is unsurpassed — and his music was instrumental in completely changing the art of ballet. Before his time, ballet music was usually dull, and always considered unimportant compared with the actual dancing. Tchaikovsky changed all that by filling his music with melodies that were just as interesting to listen to in a concert hall as in a theatre.

In 1875, when Tchaikovsky was thirty-five, he was invited by the Imperial Opera Theatre in Moscow to write a ballet. The result was a complete failure — and remained so all his life. Incredible though it seems now, that disastrous work was the immortal Swan Lake ballet. But his reputation was already established by a number of popularly acceptable works, including the great opera Eugene Onegin.

Then an extraordinary happening occurred in Tchaikovsky’s life. A wealthy woman became interested in his music — and although they never once met she sent him a yearly income of £600 for thirteen years in appreciation of his work. The money enabled Tchaikovsky to travel and compose freely, and now be wrote brilliantly: the overture Year of 1812, the Piano Trio, The Maid of Orleans, The Sleeping Beauty Ballet and The Nutcracker.

Tchaikovsky feared death almost as much as he feared life. Fortunately the end came suddenly — of cholera when he was fifty-three.