This edited article about Burton and Speke first appeared in Look and Learn issue number 560 published on 7 October 1972. 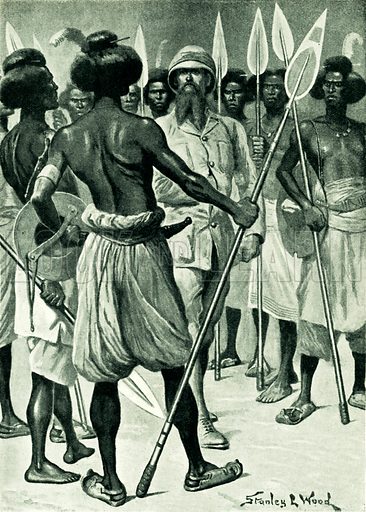 The Ancient Egyptians, who farmed the banks of the Nile over 6,000 years ago, regarded the mighty African river as sacred. They did not know where it flowed from, but believed it must be from some earthly Paradise in the centre of Africa. Even the learned members of the Royal Geographical Society in the middle of the 19th century did not know the answer.

In 1857, when the Society decided to send an expedition to discover the great lakes of Darkest Africa in order to try to find the source of the Nile, they realised that only someone of the nature of a superman could be considered to lead such a hazardous mission.

The nearest approach to a superman they could think of was Richard Francis Burton. His talents were staggering – soldier, explorer, inventor, archaeologist, author, linguist (he could speak 29 languages as easily as his own), anthropologist and student of religions. No swordsman in all Europe could stand against him with a rapier.

Burton had made a hazardous journey through Somaliland in East Africa and was the first European to enter the forbidden city of Harar where he stayed for ten days in deadly peril and then rode across the desert, running the gauntlet of Somali spears all the way. He had also disguised himself as an Indian Moslem, being one of the first white men to take part in the great pilgrimage to Mecca and Medina, the sacred Moslem cities of Arabia.

Yet, if his father had had his way, Burton would have spent his life as an English clergyman. With his heart set on an Army career, young Richard had been an unwilling student at Oxford and within a year had managed to have himself expelled. The jubilant young man had departed from university in triumph, driving a specially-hired horse-tandem. Whether by accident or design, he drove the tandem across one of the college’s finest flower-beds!

Realising that it was useless to battle with his son any longer, Richard’s father reluctantly agreed to a military career and obtained for him a commission in the Bombay Native Infantry And so began Burton’s remarkable, exciting life of adventure.

It was on June 17th, 1857, that Burton set out from Zanzibar to explore the uncharted lakes of Africa and to seek the source of the Nile. His second-in-command was an old friend of his Army days, John Hanning Speke, a giant of a man and seasoned traveller, but lacking many of Burton’s talents, particularly a knowledge of languages.

They differed in temperament, too. As time went on, and the hardships of the expedition increased, these differences in temperament resulted in the two men becoming increasingly intolerant of each other, and this was to have disastrous consequences.

They were now in the depths of humid jungle, where every step was an effort, the stench of rotting vegetation overpowering, and the torment of insects unbearable.

Burton became so ill with fever that he had to be carried on an ass and supported by bearers.

To add to the nightmare of the journey, they encountered slave caravans stricken by small-pox. Their trails were marked by dead and dying and vultures were feeding off the corpses. Then fever gripped Speke and he could only walk by being supported on both sides. One night, he became so deliriously violent that his weapons had to be taken from him.

On December 14th, 1857 after resting at Tabora they set off towards Ujiji, 200 miles away where, people believed, there was a gigantic lake called Tanganyika. If it existed, no white man had seen it. They had not gone far when some jungle fever struck Burton and in a few hours he had lost the use of his limbs. A week later Speke was struck by an eye infection which made him almost blind. He had to be carried on a donkey whilst Burton, unable to walk had to be carried in a hammock. To add to their troubles. Speke’s donkey collapsed and died of exhaustion.

One morning they had just topped a rocky hill when, far down in the valley below. Burton detected a gleam of silver among the trees. He urged his bearers to carry him a little further on and, from a better vantage point, he saw to his delight the waters of the mighty Lake Tanganyika, stretching away into the distance and shimmering in the gorgeous tropical sunshine. All the unfortunate Speke could see with his weakened eyes was a misty blob.

Both men were jubilant Could this vast expanse of water be the birth-place of the Nile? If so, then their fame as explorers would go down in history for the greatest geographical discovery of the century.

As soon as their health permitted, Burton and Speke hired two native canoes and spent a monthe exploring the lake in search of the Nile’s source. They searched in vain and it was obvious that this lake did not solve the riddle of centuries.

Speke was eager to explore the region north of the lake, for while at Tabora they had heard that an even greater lake existed. Funds were running low and equipment was short and Burton showed no enthusiasm to explore further at the moment. He considered a fresh expedition was needed. But Speke was so persistent that in the end Burton, with much misgiving gave permission for Speke to set off with a small party. It was a mistake Burton regretted for the rest of his life, and one which was to finally turn the friends into hostile rivals.

Six weeks later Speke returned bursting with excitement saying he had found a great lake which he had named Victoria Nyanza in honour of the Queen. Although he had not attempted to explore the lake, he claimed it must certainly be the source of the Nile.

Burton was both sceptical and angry. He did not doubt the discovery of the lake, but was far from convinced that Speke had found the source of the Nile. Relations between the two men were even more strained as the expedition made its way back to Zanzibar and finally to Aden where they were offered a passage back to England aboard H. M. S. “Furious.”

Speke accepted the offer eagerly, but Burton (perhaps to be out of Speke’s company) said he would stay on in Aden for a few days. Before they parted, Speke assured Burton that he would not report their successes to the Royal Geographical Society until they could do so together.

Speke did not keep his promise. The day after he reached Britain, he was showing his maps and giving his own story to the president of the Society, claiming to have virtually discovered the source of the Nile and taking credit for the success of the expedition generally. By the time Burton reached Britain, Speke was the hero of the day with Burton nowhere in the picture.

Although a second expedition by Speke and Captain James Grant confirmed Speke’s conviction that the Nile flowed from the Victoria Nyanza, Burton still disputed Speke’s claim so violently that a meeting was arranged to enable the two explorers to put their case before a panel of learned geographers.

Burton and his wife took their place on the platform, but Speke was not there. The minutes passed, then news came that Speke had been killed as a result of a shooting accident. But there were some who thought it was no accident; that Speke took his own life rather than face his one-time friend on a public platform. It was a sad end to a great adventure.