This edited article about Nebuchadnezzar first appeared in Look and Learn issue number 558 published on 23 September 1972. 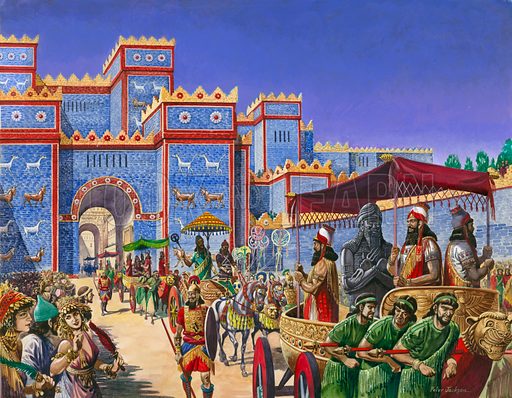 At the fall of Nineveh, that mighty citadel of Assyrian supremacy, in 612 B.C., the captive peoples of the Assyrian empire expressed their relief and happiness from the rooftops. King Nabopolassar of Babylon, whose armies, together with his allies the Medes, had brought about the destruction of Nineveh but who himself had not gone to the siege of that city, preened himself in his royal palace when the news reached him.

Now all the glory was his. Now a new Babylonian empire would arise; an empire fashioned by him for his successors; a renaissance Babylon that would last for ever.

And indeed, Nabopolassar and his successors did create a dazzling empire. It did not last for ever, for empires never do, and although in fact its glory was short-lived, it was an empire that the Bible tells us a great deal about.

Meanwhile other peoples – peoples like the Hebrews of Judah – who had cheered the fall of Nineveh, took stock of their new Babylonian rulers. What was in store for them under the new regime, they wondered.

There was still plenty of “mopping up” work for Nabopolassar to get on with. There were other Assyrians besides those who had died in their scorched capital, and they had to be cleared out before real peace could be established. So, while Nabopolassar laid the foundations of the new rule, his dynamic young son Nebuchadnezzar went to war against the Egyptians and routed them.

In time King Nabopolassar died, and his now famous son had to return to Babylon to succeed him.

But revolt was in the air. King Jehoiakim of Judah decided that his kingdom would not remain under the yoke of the King of Babylon.

So Jehoiakim rebelled, and at once Nebuchadnezzar marched an army on Judah and captured its capital, Jerusalem. At this point Jehoiakim, conveniently for him perhaps, died, and in his place Nebuchadnezzar put a new king, Zedekiah, on the throne.

The prophet, Jeremiah, counselled the new King to submit to the Babylonians, but the new King rejected his advice. Zedekiah went further: he was so anxious that no one should hear Jeremiah’s prophecies of doom if there was a rebellion that he had him thrown into a cistern. Then he, too, rebelled against Babylon.

So once again Nebuchadnezzar sent in a Chaldean army, and this time he was a very angry man indeed. For eighteen months Jerusalem held out against the Chaldeans.

Inside the city famine made the defenders’ position desperate. At last the Chaldeans breached the walls and swept in. Under cover of the night Zedekiah and many of the Hebrew defenders fled, but Nebuchadnezzar stormed after them and caught them.

The full fury of the King of Babylon was now unleashed upon the rebels. When Zedekiah was brought before him Nebuchadnezzar was in a towering rage.

“Kill his sons, all of them!” he screamed.

And the sons of Zedekiah were slain before his eyes.

“Blind him!” screamed Nebuchadnezzar, pointing to the horror-stricken Zedekiah.

And Zedekiah’s eyes were put out on the spot.

“Chain him!” yelled Nebuchadnezzar, his outstretched finger indicating the maimed and writhing King. And they put Zedekiah in irons, took him to Babylon, and threw him into a prison where he stayed until the day of his death.

Then the Chaldeans returned to Jerusalem for the final vengeance. The leading citizens were executed, the walls were pulled down, the Temple, the King’s palace and the homes of all the prominent people were set on fire; the treasures of the city were looted and a number of people were carried off by the Chaldeans into exile in Babylon.

Jeremiah, emerging from his cistern, viewed the city gloomily: “How doth the city sit solitary, that was full of people! How is she become as a widow.”

But the Hebrews did not have such a bad time as might at first be imagined. In an age noted for man’s inhumanity to man the Chaldeans showed some remarkable acts of charity to the less fortunate citizens of Jerusalem, giving them pieces of land to farm for themselves and sparing their homes and their relatives.

Even Jeremiah was politely asked if he would like to stay on in the “solitary” city, or whether he would not prefer to come along to Babylon with the other captives, with whom, he was assured, he would be well treated.

“Please yourself,” said the Chaldeans.

“I will stay here,” replied Jeremiah.

Let us now go along with the Hebrews who were taken into exile in Babylon where they tried to make the best of their bad lot. They settled down together in one corner of the city and even in Nebuchadnezzar’s time they were accepted by the Chaldeans as citizens of Babylon. What a very different place it must have seemed to them, though, when they compared it with their memories of little, far-off Jerusalem. The King, Nebuchadnezzar, was frenziedly building the city as a monument to his glory. Fortresses and strongpoints were being raised along the walls as defence measures, and a bridge spanned the river which for centuries had had to be crossed by ferry boat.

The royal palace itself, surrounded by three walls, rose in fortified splendour above the city, and was reached by the Ishtar Gate, whose square towers were ornamented with magnificent bulls and dragons.

Near the palace Nebuchadnezzar had just completed building his fabulous Hanging Gardens, which Greek visitors to Babylon vowed were one of the seven wonders of the world. The King had made the gardens, it was said, to please his Queen, who was a Princess of the Medes – the same tribe that had allied itself to his father for the final overthrow of the Assyrians. The Queen, so the story went, disliked the flatness of Babylon, so Nebuchadnezzar had his gardens laid out on terraces. Steps ten feet wide connected these terraces, which were built in tiers held up by vast arches, raised upon other arches, one above the other to a height of 320 ft., and strengthened by a wall 22 ft. thick surrounding the gardens.

On the top of the arches were laid huge flat stones covered with lead, and on this lead was the earth in which the plants were grown. Elaborate building techniques prevented the earth’s moisture from reaching the arches and undermining them, and the entire gardens were watered by a pump built on the top tier, which drew water from the river below. On these lead-based flower beds were planted the finest flowers and trees that Nebuchadnezzar’s empire could produce.

Soldier, statesman, builder – such was Nebuchadnezzar, and as always in Babylonia when a great builder was at work a great destroyer was never far away. This time, though, the conqueror of Babylonia came from outside the empire, and when the Babylon that Nebuchadnezzar had built fell, Babylonia fell for ever.