This edited article about the Wild West first appeared in Look and Learn issue number 556 published on 9 September 1972. 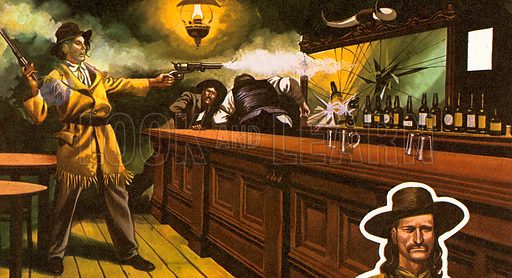 There are many stories concerning bravery and daring, horse riding and shooting attributed to the legendary Calamity Jane, but what is less known are her abilities as a nurse and her many acts of kindness, acts which at the time were just as much responsible for her fame as her more masculine pursuits.

Calamity Jane, her real name was Martha Jane Canary, certainly spent her childhood in the hair-raising atmosphere of western frontier towns, but as to exactly where she was born nobody really knows. At least three American towns were said to have been Calamity Jane’s birthplace. One story has it that she was born in Princeton, Missouri, another that her birthplace was Burlington, in Iowa, and a third tale that she was born in a trading post near Fort Laramie and that her parents had been killed by Indians. Jane, having survived the attack, was taken to the fort and adopted by a soldier stationed there.

As a child Jane was almost certainly continuously under influences contrary to those most suited to the upbringing of a young lady. Her orthodox schooling, if any, was scarce, her time was spent in the company of soldiers, gunmen, miners, and muleskinners, and as time went by Jane Canary learnt more of the trades of the west. It was said that at an early age she could handle a gun as well as any man, that in a fist fight it was far better to have her as a friend than an enemy, but in all these manly pursuits it was the handling of mules and horses in which she excelled. This later pursuit enabled her to earn a living, often working for the government and army as a pony express rider or handling pack trains.

In learning these trades contrary to those usually taken up by a lady, Calamity Jane also picked up some rather nasty habits. She is said to have drunk very heavily, which would account for the many reports of her adventures in frontier saloons, to have sworn like a trooper and to have continuously chewed tobacco. Add to all this the fact that she dressed completely in buckskins and other manly attire, it would have been difficult to have seen her as any way different to the rough, violent men frequenting the American West in the 1870’s.

After much travelling along the frontier Jane’s travels brought her to Cheyenne. Here she heard of the intentions of General Crook and his command to ride into the Black Hills, in order to drive out the gold miners and prospectors who were in danger of starting yet another Indian war, for the Black Hills were Indian territory and no treaty had yet been signed by either side. The thought of travelling into the dangerous and virtually unexplored Black Hills was too big a temptation for Calamity Jane. She made her way from Cheyenne to Fort Laramie, and found Crook’s command making final preparations for the expedition. She promptly smuggled herself amongst the soldiers, those around her probably believing her to be a scout. It was not until the expedition was well into hostile territory that a “lady” was discovered in their midst. Too far from civilisation to send her back, they had no option but to take her along. Knowing Jane’s abilities there is little doubt that she proved her worth in the war-like activities that ensued.

By the time Jane arrived in the notorious town of Deadwood in South Dakota she was famous. Numerous Indian battles, gun fights, fist fights – one tale has it that she felled a six foot man with one blow – had done much to enhance her reputation, a reputation aided by the famous company she kept, her friends including such characters as Colorado Charley, Scout Stotie, Jack Crawford and most famous of all, Wild Bill Hickock.

It may seem surprising that such a tough, hard-fighting, woman as Calamity Jane should have an incredibly kind heart and more than average ability as a nurse. But such is the case. One occurrence that would offer evidence of this is that told by Judge Bennett of Deadwood, a friend and admirer of Jane’s. The judge met Jane as she was leaving a hotel in Rapid City. Upon his enquiring as to why she looked worried, she explained to the judge that, contrary to the doctor’s instructions, she had given a sick child residing in the hotel some pickles. The doctor said the boy would die if he ate pickles and the boy said he would die if he did not have any. The judge said that he was no doctor and could not advise her. Calamity Jane thought for a minute, then said that it was up to her to see that the child did not die, then turned, walked back into the hotel and took up her nursing duties. She was successful. Some time later the judge met the boy whom she had nursed, who claimed that he owed his life to the nursing of Calamity Jane and maybe even to an ample helping of pickles.

It was in the year 1878 that Jane’s most heroic act of kindness took place. An outbreak of smallpox occurred in Deadwood and, as was the practice at the time, a pest house was set up in an isolated log cabin, thereby isolating the victims of the disease from the town and its terrified occupants. Apart from a rare visit from the doctor, the half dozen or so patients were left to fend for themselves, probably to die or if they did survive the terrible fever to be left horribly disfigured.

Upon making his first visit to the pest house, the town physician, Doctor Babcock, did what he could for the smallpox victims, then returned to Deadwood to have his daily meal and to attempt to recruit someone to return to the cabin and assist him. Fear of the dreadful disease prevented any of the townsfolk from volunteering, so the doctor returned to the makeshift hospital alone, only to find Calamity Jane administering to his patients and doing much to relieve their suffering.

Although grateful to Jane for her services, the doctor felt it his duty to warn her of the dreadful disease and its terrible after effects and infectiousness. These warnings did not deter Jane. For the next few terrible weeks she nursed her patients virtually day and night, leaving the cabin only to ride into Deadwood to obtain food and medicines. Doctor Babcock watched Jane carefully for the spots that would foretell the onset of the disease. They never appeared. Just as Calamity Jane had survived Indian arrows, bullets and many other attacks on her life, so she survived close confinement with a terribly infectious, deadly disease.

Nor were her services to the smallpox victims in vain, for most of them survived an illness so bad that, as Doctor Babcock afterwards stated, without Calamity Jane’s care and attention they would all have died. Calamity Jane spent the later years of her life travelling from one frontier town to another and from adventure to adventure. She eventually arrived back in Deadwood to spend her last days and there she died, to be buried, so legend has it, alongside her friend and counterpart, Wild Bill Hickock, although recent research has shown this fact is probably just a romantic myth.