A group of suburban villas on Herne Hill, near London 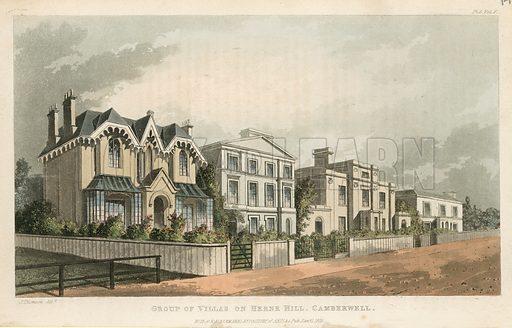 Herne Hill, near Camberwell, became a popular suburb of London in the early nineteenth century. Its name probably comes form a prominent and wealthy Dulwich family, the Hernes, who owned a good parcel of agricultural land in the area, which was gradually sold off to builders and speculators during the late eighteenth century. It was they who put up the characteristic fine small mansions typical of the late Regency and early Victorian period. Cubitt designed several substantial villas in the rural landscape, which was a picturesque combination of woodland, farms and smallholdings. So the now semi-rural district quickly became an affluent and desirable alternative to overcrowded London, with a steady influx of the educated middle classes choosing to move there in the 1830s and 1840s. John Ruskin’s family moved there just before the upsurge in popularity, and the great art critic lived there for much of his life.

Many more pictures of Camberwell can be found at the Look and Learn picture library.