An eccentric Oxford don wrote ‘Alice in Wonderland’ for fun 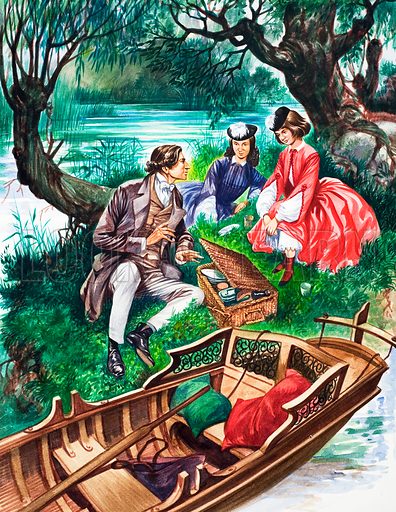 The three young girls leaned forward eagerly as Charles Dodgson began to unfold the story of “Alice’s Adventures Under Ground.” This story published under the pen name of Lewis Carroll was to make its author famous throughout the world Charles Dodgson was born in 1832 at Daresbury in Cheshire where his father was rector. He was one of eleven children – four boys and seven girls. Although he was shy with outsiders Charles was the leader among his brothers and sisters. With his vivid imagination he invented all sorts of games for them and wrote and illustrated several family magazines. His first eleven years, spent at Daresbury, were his happiest and all his life he thought of childhood as a magical time – a Golden Age.

In 1843 the family moved to Croft, near Darlington and Charles became a boarder at Richmond Grammar School and later at Rugby School. He was a clever boy and in 1851 he went as an undergraduate to Christ Church College, Oxford, which was to provide this retiring man with shelter from the outside world for the rest of his life. In 1854 he gained his B.A. degree and a year later was appointed a lecturer in mathematics. Much of his vacations he spent with his family and on trips to London where he visited the theatre and the opera. In 1856 he took up photography, a hobby for which he had a special talent.

Charles wrote verse for humorous weekly Oxford papers firstly for “Comic Times” and later for “The Train.” It was the editor of “The Train,” Edmund Yates, who chose the pen-name “Lewis Carroll” from several submitted to him by the author.

In the same year as Charles became a lecturer at Christ Church Dr. Henry Liddell became Dean of the College. The Dean’s three little daughters, Lorina, Alice and Edith, grew to be great friends with this lonely young man who was never completely at ease except in the company of children. They were always asking him to “Tell us a story!” The three girls, Dodgson and another friend Robinson Duckworth were on a river picnic to Godstow one hot July day in 1862 when in answer to such a request Charles invented the adventures of Alice when she had gone down the rabbit-hole. The children were enchanted and Alice begged him to write down the story for her. He began work that very night on “Alice’s Adventures Under Ground” but it was not for two years that Alice received the promised manuscript complete with 37 illustrations by the author. While working on Alice’s gift Charles was preparing a revised and extended version of the original story for publication. John Tenniel was the perfect illustrator to interpret the characters and when the book made its appearance in print under the new title of “Alice’s Adventures in Wonderland” it was an immediate success and had captured the imagination of generations of children ever since.

It has often been said that Charles Lutwidge Dodgson and Lewis Carroll were two completely different personalities combined in one man: the shy Oxford Don and the creative genius with his sense of the ridiculous and gift for fantasy. Lewis Carroll was pleased with the book’s reception but Charles Dodgson was embarrassed by it and went to great lengths to deny any connection between Lewis Carroll and himself.

The learned Mr. Dodgson continued giving lectures and producing weighty mathematical works. Meanwhile in 1869 Lewis Carroll published a collection of nonsense verses “Phantasmagoria,” two years later “Through the Looking Glass and What Alice Found There” made its appearance and in 1876 the nonsense poem “The Hunting of the Snark” was published.

As he grew older Dodgson became more eccentric and withdrawn except in the company of children, especially little girls, with whom he could be completely himself – perhaps they brought back happy memories of his childhood at Daresbury surrounded by so many adoring sisters.

Although he continued to write stories for children it is as the creator of the “Alice” books that the name of Lewis Carroll is remembered and loved.

In 1928 “Alice’s Adventures Under Ground,” which the author had given to Alice Liddell so many years before, was sold at Sotheby’s in London for £15,400 to Dr. Rosenbach of New York. Twenty years later a group of Americans purchased this manuscript and presented it to the British people. It can now be seen in the British Museum.