This edited article about Scotland first appeared in Look and Learn issue number 521 published on 8 January 1972. 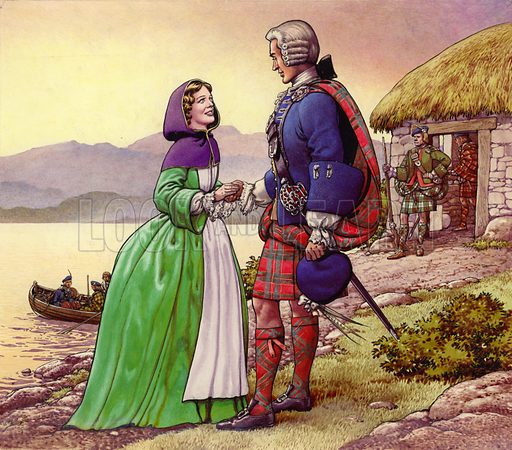 The great tract of moorland known as Culloden Moor was silent now. The guns that had belched fire and destruction stood abandoned and a thousand Scottish dead lay among the litter of a battle that had ended in the defeat of 7,000 Highlanders at the hands of the British.

It was the day of April 16, 1746, and Edward Charles, the Young Pretender, had just seen the dream of occupying the throne of his fathers vanish in the smoke of battle.

Fleeing for his life, the Young Pretender had little time to think back on those glorious preceding months when he had captured Perth, Edinburgh. All he was conscious of now was that he was a fugitive with a price of £25,000 on his head, and that somehow he must get back to France, from where he had sailed so full of high hopes, less than a year ago.

As he fled into the mists, he was sure only of one thing. Whatever happened, the clansmen would support and hide him when necessary.

The news of the disaster at Culloden spread swiftly, and eventually it reached the Hebridean island of Benbecula, where a young Highland girl, Flora Macdonald, was staying with relatives. Soon afterwards, by one of those strange twists of fate which sometimes change the whole course of history, the Young Pretender arrived on the island with a companion, a Captain O’Neil.

Hearing that Flora was there, and knowing that she was a Jacobite sympathizer, that is, one of the people who wanted the Stuart royal family back on the throne, in place of the German House of Hanover, he went along to see her. Their conversation was short and very much to the point.

“You say, Captain O’Neil, that you wish me to help the Prince to escape to Skye. But how is that possible? No one is allowed to leave Benbecula without special permission.”

“It is proposed that the Prince should disguise himself in woman’s dress. Your step-father is in charge of the militia here. Perhaps it is possible for you to obtain a passport for yourself and an Irish spinning maid, Betty Burke, who will, of course, be the Prince.”

Flora Macdonald thought about it for a few moments. “It is true I could get permission by saying I was going to visit my mother.” She looked into the captain’s anxious face. “I will agree to do it.”

On the evening of June 27, the party set out for Skye with a boat crew of six trusted men. Their oars dipped smoothly into the waters of the Minch, and the boat drew swiftly away from Benbecula. Everyone began to relax. The worst part of it was over.

Their optimism was ill founded. When the time came for them to land on the beach near Waternish they were greeted by a shower of bullets from a party of militia, who obviously believed in shooting first and asking questions afterwards. As they rowed furiously away, Flora decided that they should make for Kilbride. With bullets still spattering around them they disappeared into the darkness.

They landed at Kilbride in the early hours of the next morning, where the Prince spent most of that day and night hiding in a cave. The next day they journeyed to Portree, where Flora arranged for a boat to convey him to Rothesay. Before they said farewell to each other, the young Pretender presented her with a gold locket.

It was by no means the end of the whole sad affair for Flora Macdonald. She returned to learn that the boatmen from Benbecula had been arrested, and that they had divulged the whole story to the captain of the local militia.

Even then she could have fled and hidden in the mountains. Instead, she preferred to give herself up to the local authorities, who treated her with surprising courtesy. She was allowed to pay a brief visit to her mother on Skye, and then she was conveyed to the Tower of London, where she was imprisoned for a short time. Later, she made a happy marriage and lived with her husband in North Carolina, U.S.A., for a while before she returned to Scotland, where she finally died in Kingsburgh on March 5, 1790.

It had been said that in her short time with the Prince, Flora Macdonald fell in love with him. Later in her life, however, she stated that her sole motive in helping the Prince to escape was that he was in distress, and that she would have done the same for anyone else, whatever their loyalties.