This edited article about aviation first appeared in Look and Learn issue number 495 published on 10 July 1971. 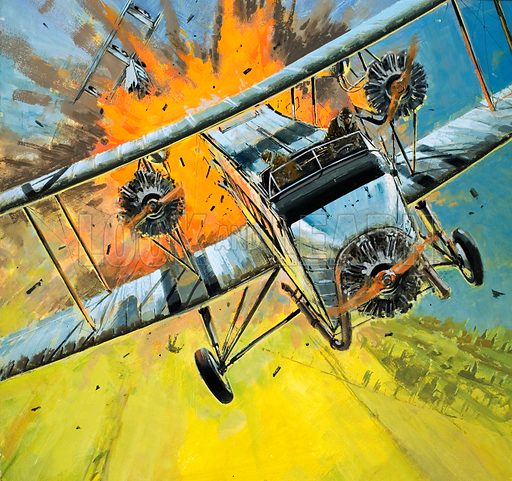 The sky was a clear blue and there was hardly a breath of wind. Flying conditions were perfect.

The Argosy airliner, City of Liverpool, was on a flight from Brussels to Croydon. It was a routine passenger flight at a height of 4,000 ft., and the plane’s speed was a steady 95 mph. The date, a tragic one in the history of Britain’s first great civil aviation service, Imperial Airways, was 28th March, 1933.

Armstrong-Whitworth Argosy airliners had been in service with Imperial Airways since 1927, and were widely regarded as just about the last word in passenger luxury. The very first “Silver Wing” flights, as they were known, had begun with a lunchtime service between London and Paris in 1927, with up to twenty passengers enjoying a buffet meal in a luxurious enclosed cabin.

The Argosy was powered by three Armstrong-Siddeley Jaguar engines, and its two pilots sat side by side in an open cockpit with a windshield in front of them.

At 90 or so mph, there was plenty of time to eat a meal in comfort, and soon the service was extended to other routes, including London to Brussels and back. Both passengers and crews were very fond of the reliable and comfortable fleet of Argosy planes.

On that March day in 1933, the City of Liverpool had reached Dixmude, a Belgian town not far from the English Channel.

Suddenly, a fire broke out in the rear of the passengers’ cabin. There were twelve passengers on board that day, plus the two pilots and the steward.

Watchers on the ground first saw a thin trail of smoke emerging from the end of the fuselage, then alarm mounted as they saw a jet of flame.

As the chief pilot became aware of the desperate situation rapidly developing behind him, he at once put his plane into a shallow dive to try and make a forced landing as quickly as possible, without at the same time putting too much stress on the rapidly weakening structure of the plane.

Those watching fearfully below suddenly saw a figure fall from the plane to his death. They watched with bated breath as they observed the pilot standing up high in his cockpit, struggling desperately with the controls as he fought to make the aircraft respond to them.

When the Argosy was a mere 250 ft. from the ground, the onlookers heard two sharp reports above and, to their horror, saw the plane’s fuselage become a raging inferno and break in two.

Moments later, all was over. The front of the plane plunged vertically into the ground, carrying with it the crew and the remaining passengers, and, as it hit the ground it burst into flames. The rear of the plane was destroyed in the same way.

This was the worst disaster in the 14 year history of British civil aviation, and the first fatal accident involving an Argosy in the plane’s six years of operational flying.

What made it seem all the more staggering to the experts trying to solve the mystery of the disaster was the fact that the Argosy was especially famous for its reliability, and the exhaustive enquiry held as soon as possible after the crash did nothing to clear the matter up.

Rumours of sabotage circulated, and the lives of the passengers who had died in the crash were carefully scrutinised for some clue, but nothing definite about the true cause of the tragedy was ever established.

What was left of the City of Liverpool provided no useful information about the crash, and to this day, the disaster is as baffling as it was in 1933, when Belgians looked up into the blue sky and saw a horror story acted out before their eyes.