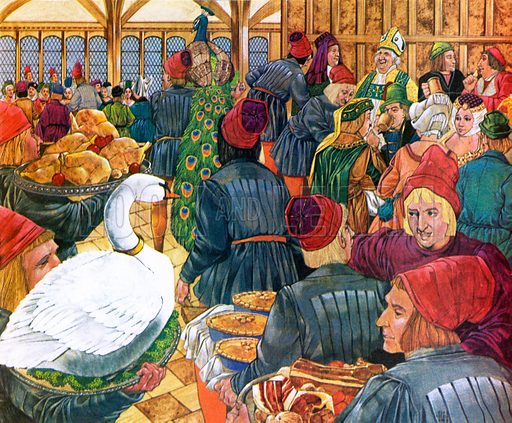 The year is 1467, and in the City of York a new Archbishop is to be installed – meaning literally to be placed in his official “stall,” or upon his throne. The occasion has demanded that there be held a “feast,” for all of six thousand guests. Quite a party for Archbishop Neville and the high-rankers of the land! For in those far-off times it was only the wealthy who could afford to eat and drink themselves into the kind of rollicking stupor which must have been the aftermath of merry-makings such as this one – one of the greatest in recorded medieval social history.

Moreover, practically all jollifications were hooked on to the great church festivals, or special church occasions like the enthronements of Bishops or Archbishops. These were the “Feast Days,” and we may wonder how deeply devout the company were feeling after the first few cups of wine, and at the end of their tremendous feats of stuffing themselves. Not for nothing were the medieval merry-makers dubbed voracious feeders.

The fact was that medieval man of means not only ate monstrously, but also ate practically anything which ran, swam, flew or hopped. And the cooking, by all accounts, was elaborate and crude all at once. They seemed to throw in everything to hand, especially spices to conceal anything a “bit off,” or to make the inedible a bit more appealing. And, really, they would tuck into practically anything – herons, for example, or cranes.

But how about the ordinary folk? There were, of course, no outings for high days and holidays, and few distractions for any who felt like “going out on the town.” “Going out on the village” was the only thing available, and many rustics must have noticed, with hope, that parts of the church were in dire need of repair, or that the parson needed new vestments.

When, in fact, parish churches needed funds they would beg off the squire or other well-to-do person a gift of malt. This would then be brewed into a powerful beer known as “Church Ale.” This was on sale, generally in the church itself, to all and at not too exhorbitant a price.

That very priggish Elizabethan chronicler, Philip Stubbes, whose motto might be said to be “down with everything,” took a very dim view of “Church Ales” as far too merry a means of supporting the national religion. Finally, indeed, they were suppressed by law. Maybe some villagers were a trifle too jolly for Stubbes.

Nearly every old-time merry-making was part-pagan. It defied the cold seasons by the indoor festivities of Christmas and the turning of the year: it rejoiced in the growth and fertility of the warm seasons. May Day had its especial flavour, when all the countryside honoured the exuberance of new growth. Out with the mead and the home-brewed ale, into the meadows and woodlands to collect garlands of young leaves and flowers. Up with the Maypole, and on with the dance.

Of course, the merriest time of all the year in the countryside was that of “harvest home.” It is not Stubbes, but a 17th-century chronicler named Nicholas Breton who paints our picture of rustic delight – and what a picture of a real old spree!

“Now begin the gleaners to follow the corn-cart, and a little bread to a great deal of drink makes the traveller’s dinner . . . the pipe and the tabor is now set lustily to work, and the lad and the lass will have no lead on their heels; the bride-cup is carried above the head of the whole parish: the frumenty pot welcomes home the harvest cart, and the garland of flowers crowns the captain of the reapers. . . .”

In all the barns of England the long tables for Harvest Supper were set – great chines of beef, pasties of venison, corn-cakes and especially brewed “harvest ale.” There the fiddlers struck up their jigs, everyone capable of it danced, and all were “wondrous merry,” knowing that the next day was to be a holiday and that any who had horseback would take it, two or more to a horse, to the nearest market, and make yet another day of it.

Arduous tasks like flailing and threshing would come; after them the brief, possibly tipsy fooleries of “All Hallow’s E’en,” and after that, the winter, with Christmas – the Christ Mass – in the middle of it. Whenever possible in the often glum country days a “good time was had by all”!