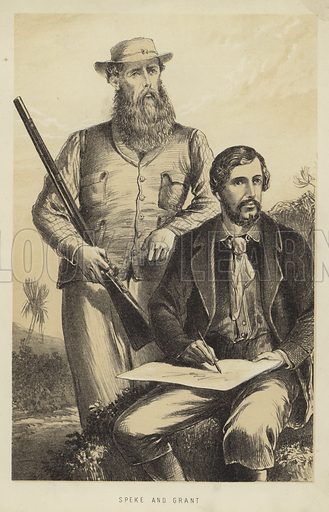 John Hanning Speke and James Grant, the Scottish explorer who accompanied the English explorer on his 1860 expedition to prove Lake Victoria was the source of the Nile

Somerset-Born explorer John Speke sat under the awning on the deck of the little boat that slipped smoothly down the River Nile towards Khartoum and gazed contentedly down at the muddy waters of the great river.

Contentedly, too, Speke thought back to the day nearly three years ago when the Royal Geographical Society in London had asked him to lead an expedition to discover the source of the Nile. Now, with thirteen hundred miles of trekking through scorching, steaming jungle behind him, Speke was going home, his mission completed.

Africa and its perils were no novelty to John Hanning Speke when the London geographers sent him off on his path of discovery in 1860. In one of his earlier excursions into the continent natives had attacked his party and tied him up. As he lay on the ground with his hands bound one of the natives had coolly attempted to spear him to death. Speke jumped up, knocked the weapon from the native’s hand, sent him sprawling and escaped to a waiting boat.

Another time, on a Royal Geographical Society expedition, fever inflamed his eyes and practically blinded him. But nothing daunted, Speke pushed on into the continent and discovered a huge lake, which he named Victoria Nyanza. From what the local natives told him he was sure that the lake was the clue to one of the great geographical mysteries of the 19th century – the whereabouts of the source of the Nile. But when all attempts to get boats for an exploratory voyage failed he had to return to London.

Speke’s report and his discovery of Victoria Nyanza caused earnest discussion in London and when the new expedition was mounted in 1860 Speke was named as its commander with Captain J. A. Grant as his deputy.

From London Speke took his men to Zanzibar, thence towards Victoria Nyanza, via Uganda.

Along this tortuous route Captain Grant fell ill and Speke decided to go on without him. Fresh troubles awaited the explorer when his party arrived at the city of King M’tesa of Uganda.

M’tesa had all the temper and unpredictability of an early English king. None of his subjects dared to cross him.

Speke decided that if he showed servility when he met the King it might be taken as a sign of weakness. So when M’tesa did not turn up on time for a prearranged meeting Speke told the King’s astonished courtiers that he was prepared to wait five minutes – and no longer. After that he would go.

Of course, none of the courtiers dared to convey this message to M’tesa, and when five minutes had passed Speke simply got up and left in a rage. When the King finally heard what had happened he was completely taken aback. He sent a message to Speke asking him to return at once and telling him he would be allowed to sit during their discussion – an unheard-of concession at M’tesa’s court.

Further – the King told his officials that he would eat no more food until he had talked with this determined white man!

To make his dignity quite clear Speke took his own chair along to his meetings with the African king. On one of these friendly occasions the explorer gave M’tesa a loaded rifle, showing him how it worked.

M’tesa turned to a boy standing at his side. Speke had no idea what the king told the boy that made the youngster hurry away with the rifle. Too late he discovered that the crafty M’tesa had said:

“Try this thing out on the first person you meet and see if it works.”

When the boy came back a few minutes later he grinned with satisfaction as he indicated over his shoulder the direction of the corpse he had left on the ground.

Another time, on a hunting trip with the king, Speke watched in amazement as M’tesa, angered by one of his several wives, ordered her immediate execution.

“I rushed at the king,” the explorer wrote afterwards, “and staying his uplifted hand, demanded from him the woman’s life.”

Knowing the king’s violent temper Speke was well aware of the danger he brought upon himself by his humane act. M’tesa must have known it too, and in his astonishment ordered the erring wife to be freed.

Speke had been waiting in Uganda all this time for Captain Grant to recover and join him, and to obtain M’tesa’s permission for their advance to Victoria Nyanza. The trouble was that several months had gone by and M’tesa, who had by now taken a liking to the white man, was reluctant to let him go. When at last Grant rejoined his leader, however, M’tesa sadly agreed to let the white men proceed.

Beyond M’tesa’s capital the party now split in two, with Speke leading his section towards the River Luajerri. Swimming and using boats in the deeper parts it took four hours for the party to struggle across in scorching heat and plagued by biting insects.

The next objective was Urondogani, on the Victoria Nyanza, where Speke hoped to get boats to explore the lake, and discover the Nile’s source. But the natives were not friendly along the way and when the white men asked them to show the route they were often deliberately misled. Despite these difficulties, Urondogani was finally reached.

But there were no boats. The natives made it clear that they would not help white explorers.

Angrily Speke sent word back to M’tesa complaining of the lack of co-operation. While the message was going through he set out to explore the banks of the lake, and it was on this trip that he discovered what he had thought – that the Nile rose at the northern end of the Victoria Nyanza.

Among the crocodiles basking in the sun, the hippopotami snorting in the water, and the grazing hartebeest the Englishman from Somerset surveyed the scene. “I saw that old Father Nile without any doubt rises in the Victoria Nyanza,” he wrote.

M’tesa, having received Speke’s message, quickly made boats available and with a native party the explorer set out down the Nile to link up with Captain Grant’s party.

The journey back, however, was even more perilous. Before meeting Grant again Speke was involved in a tribal fight and turned right off his route by a hostile native king. When the two explorers did link up again another African ruler held them up for weeks because he would not give permission for them to proceed through his territory.

When at last Speke and Grant emerged from the jungle and boarded a boat loaned by another explorer bound for Khartoum, Cairo and home, they had paid for the discovery of the Nile’s great secret with nearly three hazardous years of their lives.