Thomas H Tibbles – the teenage hero of the abolishionists

This edited article about America first appeared in Look and Learn issue number 488 published on 22 May 1971. 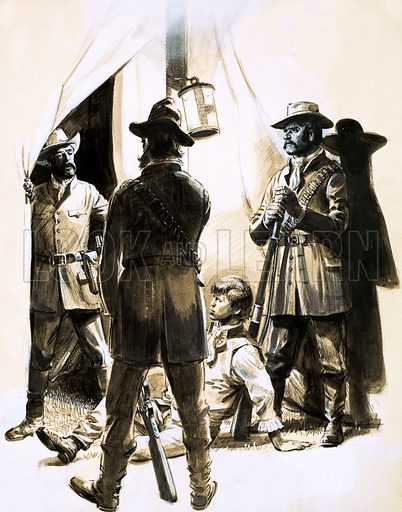 Thomas Henry Tibbles, aged 16, was sentenced to hang for his anti-slavery activities

Thomas Henry Tibbles came to manhood early. He was only ten when his father died, and he had the responsibility of running the 40-acre family farm for his mother and two younger brothers.

He enjoyed the challenge and the hard work; and vowed that as long as he was fit and able he would fulfil his role as bread-winner. Unfortunately for Thomas and his dependants, the law in the state of Iowa, U.S.A., did not allow so young a person to work unsupervised.

The local sheriff took him away from his family, and apprenticed him to a nearby farmer who had six daughters, but no son to help him in the fields. From the beginning Thomas was treated as a slave, and found himself no better off than an black American in bondage.

“I rose at four,” he said, “made the fires, fed the horses, cattle and hogs, and milked the cows before breakfast. Then my day’s toil of a man’s work began.”

To add to this, the youngster was not even allowed to visit his mother and brothers. He was kept as a prisoner, and a year went by in this manner. Eventually, unable to stand the injustice of the situation any longer, he decided to run away.

One morning in 1851 he awoke at four as usual. He took one of the farmer’s horses, and rode over to see his mother. Although Mrs. Tibbles was delighted to see him, she warned Thomas that he would be branded as a criminal and possibly put in prison.

This made him even more determined to remain at liberty. He said goodbye to his family, and travelled by steamboat to the city of Quincy on the Mississippi River. He worked in Quincy for some years, and then felt the call of the open spaces.

He was now 16 years old, and his early experiences had made him a staunch opponent of slavery. He deplored the fact that Negroes were forced to work unconditionally for their white masters. And when, in 1856, he moved to the Iowa town of Winterset, he joined a band of abolitionists who were passing through.

The abolitionists – who strove to do away with slavery – journeyed throughout the middle of the United States seeking supporters in every city and village. Inspired by the example of their fanatical leader, John Brown, Thomas armed himself with a musket and set out on an anti-slavery campaign of his own.

His reputation as an orator went before him, and when he neared the small mid-western town of Lecompton, his enemies were waiting for him.

He was particularly opposed to a group of pro-slavery soldiers known as the Border Ruffians, and their leader Colonel William Titus. He had long hoped to capture Titus and hand him over to John Brown’s troops.

On arriving at Lecompton, Thomas went to a hotel, laid his gun in a corner of the room, and prepared to enjoy a much-needed rest. Suddenly, however, the door burst open and two Border Ruffians entered to arrest him.

Almost before he had time to think, Thomas was marched at gunpoint to the troops’ headquarters. There he came face to face with Colonel Titus who told him that he was to be court-martialled and put on trial for his life.

Within a few hours the trial had been convened. The court was headed by the Colonel himself, and Thomas – who conducted his own defence – realised that the verdict was bound to go against him. He was considered a menace and a nuisance, and had to be put speedily out of the way.

A short while later the members of the court-martial – who included a United States marshal and the town sheriff – retired to consider their verdict. At seven o’clock that night they returned to the courtroom and declared that the prisoner was guilty as charged.

The sentence was that Thomas Tibbles, aged 16, and an active abolitionist, was to be publicly hanged at eight o’clock the following morning. There was no question of an appeal, and Thomas was taken to Fort Titus, on the outskirts of the town, to await his fate.

He was placed in a tent with two armed guards, and was forced to lie down on the bare ground. As darkness fell, an officer entered to give the men their orders.

“If the prisoner attempts to escape,” said the officer, “you must shoot him on the spot. If the local abolitionists attack the fort during the night, you will shoot him at the first sound of musket-fire.”

As it happened, the night passed peacefully enough. But shortly after dawn Thomas was awakened by the rattle of musketry.

“Looking up,” he said, “I saw a dozen bullet holes in the tent. Only one guard was there, and he stood at my feet with his musket at ‘ground arms’ by his side. He at once brought it to his shoulder and pointed it at my chest.”

The soldier was squeezing the trigger when Thomas instinctively lunged at the bayonet. The musket shot tore through the sleeve of the youngster’s shirt, and at that moment a bullet from outside the tent struck the sentry in the temple.

The man fell mortally wounded. Snatching the guard’s gun, Thomas ran outside to where the abolitionist troops had battled their way inside the fort. The attack continued fiercely, and before long Titus’s men hoisted the white flag of surrender.

This was Thomas’s chance to try and capture the Colonel himself. He dashed towards the officer’s quarters, entered the bedroom, and saw Titus sitting in the far corner with a bloodsoaked bandage on his right shoulder.

For a moment the wounded man thought that Thomas had come to avenge himself. Titus held up his hands and pleaded: “Don’t shoot! Don’t shoot! I surrender!”

Thomas stared grimly down at the man who only the night before had sentenced him to death. He lowered his musket, told the Colonel to get to his feet, and then marched him outside and over to the captain in charge of the abolitionist force.

It was seven o’clock – just one hour from the time when Thomas was to have been put before the hangman. He had escaped with his life, and went on to become one of the best-loved reformers of the day.

He supported the abolitionists until the Civil War of 1861-65 secured their cause, and slavery was abolished in America. He then gained added distinction as a preacher, politician, journalist, and champion of the oppressed Indians.

“I have always gone my own way,” he declared. “And prefer to travel a lonesome trail.”