This edited article about exploration originally appeared in Look and Learn issue number 423 published on 21 February 1970. 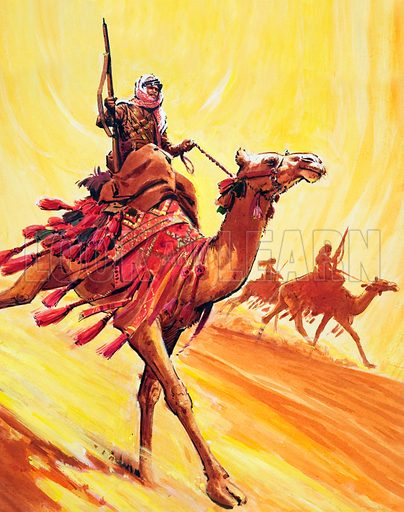 The adventurer Bertram Thomas celebrates finding water during his incredible journey across the worst desert in the world, the legendary Empty Quarter or The Sand

Even today few Europeans have crossed the Empty Quarter and endured the terrible strains of its ferocious heat and bitter cold, the agonising lash of its driving sands, the blinding glare of the desert sun and the desperate search for its bitter, evil-tasting water. Even the Bedouins, brought up to the hardships of desert life, are under continual strain.

Fifty years ago it seemed that no Europeans would ever make the crossing. So impossible did the idea seem that the great Lawrence of Arabia, who was more at home in the desert than in Britain, claimed in 1929 that the only way to cross and explore it was by airship! But a fellow-Englishman, Bertram Thomas, had other ideas.

Thomas, born in 1892, was a sailor’s son, but it was the desert, not the sea, that lured him. In the 1914-18 War he served in the Middle East and stayed on there afterwards. He had such a genius for getting on with Arabs that in 1924 he found himself Prime Minister of Muscat, the first Briton ever to become Prime Minister of an independent Arab State.

His greatest ambition, however, was to cross the Empty Quarter. While Lawrence was dreaming about airships, Thomas started looking for Arab guides.

In October, 1930, he sailed in an oil-tanker from Muscat on the Persian Gulf to Dhufar on the southern Arabian coast. Near Dhufar he was transhipped to a small Arab dhow. The dhow could not get through raging surf into Dhufar, so the captain headed down the coast to a sheltered bay named Risut. There they became becalmed and were nearly overturned by a playful sperm whale!

When Thomas finally landed, he hired a horse and rode to Dhufar. He had arranged to be guided by a sheik named Salih, who was to provide camel transport, but tribal warfare was raging in the interior and Salih had not arrived. He did not arrive for six weeks!

Thomas filled in his time exploring the area; then, just as he was about to give up and sail back to Muscat, forty ragged-looking Bedouins on forty superb camels swept into the town led by Sheik Salih, a tough, bald Arab of about sixty.

The Sheik told Thomas he could only take him as far as his tribal boundaries, not to the Persian Gulf. It took three days arguing and bargaining, including the promise of a camel, a robe and a rifle, to get him to change his mind. But he insisted his men must not be told of Thomas’s mad plan.

They set off into the mountains. It was more than a week before they reached the Empty Quarter, but already the going was hard. Thomas was told about the sweetness of the water-hole of Hanun, but found it so bitter that he wondered what his companions called bad water! Days were continually cut short by finding food for the all-important camels, who could carry a load for a week if they had food.

Now they reached the true desert. It was a land of shimmering mirages and not a spot of green to break the pattern of the endless sands.

Suddenly, they were in dangerous country. Any party of Bedouins they might meet would almost certainly be hostile. Scouts were always ahead to see if the water-holes were clear of enemies. Then thunder was heard in the distance. The camels smelled rain. The party split into three groups and some hours later a shot rang out. Water had been found. Thomas enjoyed a real drink from a rock pool.

Most nights the scorching heat gave way to freezing cold. Thomas had a couple of blankets; his companions made do with their thin cotton clothes.

Things grew worse. Food was very short, and, strung out in a line, they were a sitting target for raiders. One night a scream rang out. Everyone grabbed his rifle. But it was only a wolf!

On Christmas day they feasted on dried-up soup and baked beans, then the next day they found water, the first the camels had had in eight days. Suddenly, black spots appeared on the horizon. They turned out to be tribesmen under Hamad ben Hadi, who had been hired by the Sheik to meet them in the middle of nowhere with fresh camels!

They headed for the water-hole of Shanna, which was less than half way to the coast. Food was now desperately short. Any delay would be fatal, yet their progress was slowed down by Hamad ben Hadi, who was so notorious a warrior with so many enemies that every horizon had to be searched to see if there were any about!

Shanna was reached safely and the Sheik now left, leaving Hamad in command of a new escort. By now, Thomas had lost a stone and a half in weight. They passed a water-hole where the sand was so soft that four Arabs had recently sunk to their deaths in it, so they headed for the next one.

One evening, as they sat round a fire, a savage sand-storm swept down on them. The gritty hail lashed and stung their faces and the cold was intense. The next day the desert seemed to be a smoke screen of drifting sands. They found a water-hole and crouched around it, putting up a crude shelter of desert shrubs which luckily grew in that area.

Thomas and Hamad were the first to reach the next water-hole. They waited to drink until the rest appeared: such is the law of the desert. At last they reached the edge of the Empty Quarter. Thomas relaxed and joined in Bedouin games, including wrestling on camels with a ten foot drop to the sand for the loser.

On 2nd February, 1931, they reached the sea at Doha, fifty-eight days after Thomas had set out. The great journey was over and the Arabian sands had not claimed a single victim.