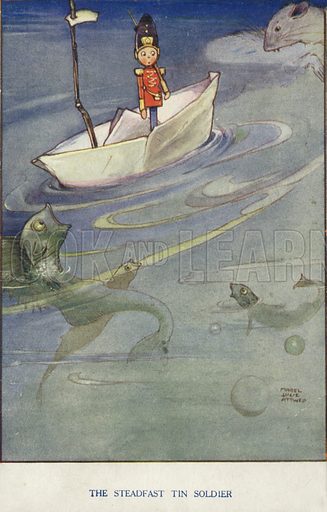 It was on the death of his cobbler father that the citizens of Odense, in Denmark, first commented on the odd behaviour of Hans Christian Andersen. The youngster did no work and spent his days sewing clothes for the puppets which were his proudest possession. Eventually the neighbours told Mrs. Andersen that she must make her unambitious son take a job, and help to support her. So Hans was sent out to work in a cloth mill, and then in a snuff factory. But in both places he fell foul of his fellow apprentices. They jeered at the way he sang out loud for most of the day, and told him he should be an actor on the stage.

Hans entirely agreed with them and, in 1819, when he was fourteen years old, he told his mother that he was going to seek his fortune in Copenhagen, the Danish capital. On reaching Copenhagen he scraped a living by giving professional puppet shows. A year later, after working as a stage-hand, the tall thin youngster made his first appearance at the Royal Theatre as a masked troll, or evil giant, in a newly-written ballet.

As an actor-dancer, however, he was not an outstanding success. Realising this, he spent much of his time writing plays, novels, and opera librettos. But despite the production of some of his tragedies, and the publication of his first poems, Andersen still did not feel that he had found the right outlet for his undoubted talent. It was not until 1835, after he had established himself as a dramatist, that he wrote the first of his unique and beautiful fairy stories, The Tinder Box. Altogether he wrote four such tales, and regarded them as being mere trifles. He scoffed at a friend who told him that the stories would bring him immortality, and placed his faith in a novel he had just completed.

Despite his indifference to his fairy-tales, he soon published a second batch, including The Little Mermaid, Thumbelina, and The Emperor’s New Clothes. It was only after the enormous success of these that he felt that his genius had finally come into its own. Many of the stories contained scenes and characters from his childhood, when he had wandered idly through the streets of his home town. And he remembered how a fortune-teller had once told his mother that: “Your son will become a great man. One day all Odense will be illuminated in his honour.”

Although his writing career flourished, Andersen was doomed to unhappiness in his private life. He never married, and many of his days were shrouded by moods of black despair. In an unsuccessful attempt to shake off his gloom he travelled throughout Europe, and finally died in Denmark in 1875. But children always associate the magic words “Once upon a time” with Hans Christian Andersen and for them his stories will live on.