This edited article about the Dalai Lama originally appeared in Look and Learn issue number 309 published on 16 December 1967. 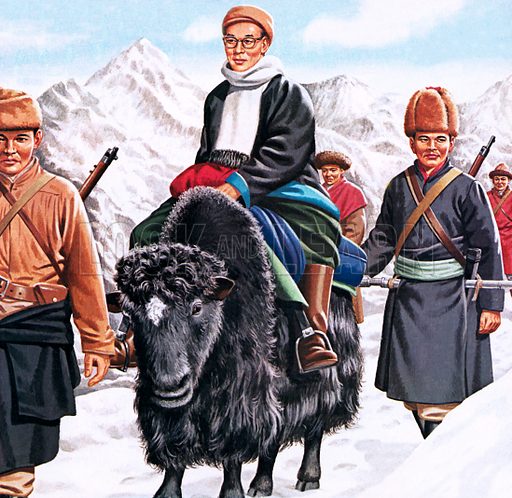 The young Dalai Lama fleeing the Chinese by John Keay

“The first we knew of the Tibetans’ arrival was the reedy hooting of a jeep at high speed . . . a jeep full of Gurkhas of the Assam Rifles: and close behind them a closed jeep, out of which stepped stepped the Dalai Lama”

For a fleeting moment, as the thundery clouds parted, Rene Cutforth glimpsed the huge, snow-capped peaks of the Himalayas. “They were so high,” he said, “that to see them I had to tilt my head right back – as if I was looking at the moon.”

Rene Cutforth, a foreign correspondent of vast experience, was at Foothills, a place where the highest mountains in the world rise up from the Assam plain. Armed soldiers barred his way along the stony track which wound steeply upwards, to vanish in the high, green hills.

Beyond those gigantic mountains was Tibet, a land still so remote that few Westerners have ever been there.

For a long time the border towns had been alive with rumours that the Khambas – the horse-riding farmer-soldiers who lived on the Tibetan plain – were in revolt against the Chinese. Now news had reached London that the Dalai Lama, the king and religious leader of the Tibetan people, was fleeing the country.

Pursued by the Chinese, who planned to hold him as a hostage, this dignified and lonely young man was riding through tremendous blizzards across the roof of the world, heading for the Himalayan passes, with the intention of seeking sanctuary in India.

Rene Cutforth flew to Tezpur, an ancient city in a bend of the River Brahmaputra, and the last outpost of civilisation before the Himalayas.

“We didn’t know if the Press would be allowed to meet the Dalai Lama or not,” he told me. “The road north out of Tezpur, which led to the Himalayan foothills and Tibet, was strictly out of bounds. And one thing was made perfectly clear. Anyone found north of that line would end up doing several years in prison.”

Rene Cutforth’s first move on arriving in Tezpur was to hire the only available car – and that was 15 years old. Then he set about finding somewhere to sleep. The Indian hotel in Tezpur wasn’t a suitable place, but then someone remembered the Planters’ Club. Rene paid five pounds and became a life member.

He then telephoned a colleague in Delhi, No – there was no further news of the Dalai Lama.

“Shall I send a piece about Tezpur?” he asked.

“No good,” came the reply, “the Government has clamped down on all newspaper stories.”

Rene next went to the telegraph office, to send a cable to London. With great difficulty he roused the elderly clerk he found fast asleep on a wooden bench. He then discovered that he could cable only about 15 words – certainly not the four or five hundred he had in mind.

At half-past seven it started to rain.

“For eleven hours that night, and every other night I was there,” Rene said, “The rain thundered down on the tin roof of the hotel. It was difficult to hear yourself speak.”

Within a few days, 60 or 70 correspondents and cameramen had assembled – and there they sat. There was absolutely nothing for them to do. “We lived on excellent curry,” Rene recalled, “and very rusty tins of sardines from the bazaar; we went for long car rides, watched various religious festivals – and tried very hard to think of ways of reaching the Dalai Lama.”

By now it was clear that the real story would be a first-hand account from the Dalai Lama, or one of his escort, of the escape from Tibet.

After nearly a fortnight of waiting, Rene Cutforth was almost desperate for action. Would it be possible, he wondered, to get through the jungle north-east of Tezpur and intercept the Dalai Lama beyond the boundary line?

He hired an elephant. “There were elephants all over the town,” he told me, “carrying firewood and loads of hay.”

At six o’clock the next morning, as soon as the rain stopped, he put on native Indian clothes and rubbed brown dye on his face, hands and legs. He crept out, and made his way to the old fort on top of the hill, where the elephant was waiting. “I climbed up on to it,” he said, “between the mahout and a load of wet hay.”

As the elephant crashed through the jungle, Rene wondered whether his plan would succeed, or whether he would be discovered and flung into prison.

Suddenly, he was surrounded by armed Sikhs.

“The Sikh major looked at me,” he said, “and then began to laugh. Finally, he said, ‘I see you, Sahib. Come on down.’ He fined me a hundred rupees on the spot – and provided me with an escort to the road!”

Rene thought he had got off very lightly. “But,” he said, “I had to walk the whole length of the market, and along the road back to the Planters’ Club, clad in all my finery, with everybody looking at me!”

Not long after this attempt, the ban on sending news out of the country was lifted and Rene Cutforth was able to send back all the ‘colour’ stories he had been writing since he arrived.

“Then,” he said, “just when we had given up all hope of anything happening, we heard that the Dalai Lama was on the way. It was five-thirty in the morning, and the rain was lashing down. I grabbed my recording gear and clambered into the bus with about thirty other competitors, and we jolted up to Foothills.

“There, high above, like tiny little midgets, I could see a group of men coming down. Four hours after we first sighted them the Dalai Lama and his party arrived.”

The Press of the world was waiting.

With a background of hooting jeeps, Rene Cutforth recorded his eye-witness description of the scene, but he did not get an interview. Nor did anyone else, because the Dalai Lama did not speak. He only smiled a wide, confident smile. “Somehow,” Rene said, “I managed to get my microphone near his mouth as he was being jostled along, but he only kept up a continuous murmur which sounded like ‘Ulla, ulla, ulla, ulla . . .’ That was all.”

One of the greatest stories of the century had to wait until the Dalai Lama had found refuge on the other side of India, at Mussourie. And by then, Rene Cutforth was on his next assignment.