Vilhjalmar Stefansson discovered a tribe of blond eskimos by accident 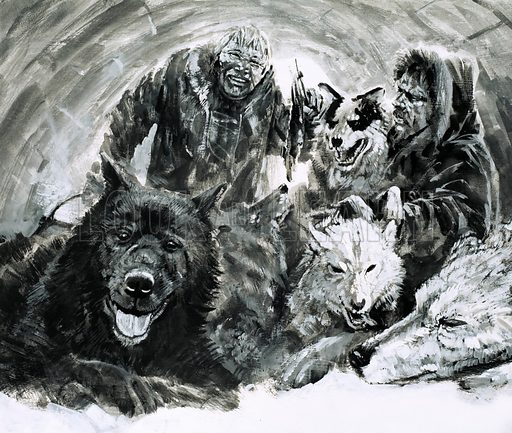 Looking across the large ice-floe, the polar explorer Vilhjalmar Stefansson saw the huge white shape of a bear appear from behind a hump of ice and begin to stalk his tethered sledge dogs. He swung up his rifle, took quick aim and fired. With a grunt the huge beast collapsed on the ice.

Stefansson moved towards the bear. As he approached, the animal suddenly came to life. It lumbered to its feet and charged the explorer, its terrifying jaws agape.

Stefansson knew he had only seconds to save himself, and even then it was a question of hitting the bear in the right spot so that it would be killed outright.

He did not have time to aim. His finger automatically contracted on the trigger, but it was a lucky shot. This time the bullet struck the enraged bear in the head and it crashed down dead only six feet away.

It was one of the explorer’s closest brushes with disaster in his exciting career.

Although he was born in Arnes, in Manitoba, U.S.A., on November 3, 1879, Vilhjalmar Stefansson came of Icelandic parentage, and no doubt the old Icelandic love of adventure was in his blood.

Stefansson had a theory that, if Eskimos could “live off the land” in Arctic regions, he could learn to do the same. Consequently, during five years (1908-1912) he spent among the Eskimos of the northern coasts of America, he learned the Eskimo language, and how to hunt, and build igloos. During this time he discovered a tribe of blond Eskimos who until then had never seen a white man.

Stefansson’s big chance of exploration came with the Canadian Arctic Expedition of 1913-1918. When his ship, the Karluk, became trapped in the ice 10 miles off the coast of Alaska, he left it and proposed to make a journey across the sea-ice to the unmapped area of the Beaufort Sea.

His plans for the expedition, based on his theory of living like the Eskimos, came in for a lot of criticism. His second-in-command thought the attempt so foolhardy that he refused any assistance.

With two companions, six sledge dogs and only enough food to last for 30 days, Stefansson set off. The men slept in snow houses at night, and the seals Stefansson shot provided both meat and warmth, for they burnt the blubber oil in their stoves.

As the journey continued, they were beset by bad weather, trouble with bears and periods when they could find no game to kill. Once things became so bad that they were forced to feed the dogs with their bedding.

Sometimes they had to cross open water between ice floes, and this they did by wrapping a tarpaulin round their sledge so that they could use it as a canoe.

After 96 days, during which period they covered 700 miles, they came off the sea-ice and reached Banks Island. Here, in August, when there was open water round the island, they had hoped to meet another ship, but there was no sign of it now.

They began to trek south, mapping the new territory as they went.

At last they reached Cape Kellet, and on September 11, 1914, Stefansson looked up and saw the tops of two masts looming over a small hill ahead of them. The ship had arrived at last, and the journey – described as impossible – had been accomplished. The explorer had proved that it was possible to live off the land in the icy wastes.

When he wrote a book on his experiences, Stefansson called it The Friendly Arctic.