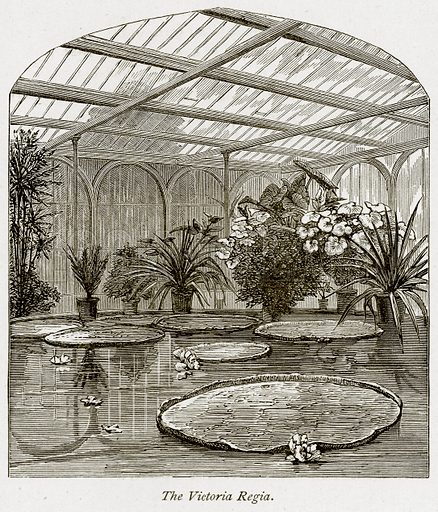 The Victoria Regia in the Conservatory at Chatsworth designed by Paxton

When he was 12 years old, Joseph Paxton decided to run away. He was tired of working 12 hours a day without pay on his brother William’s farm. He was sick of a diet of thin soup, dry bread, and – as a special treat – turnips! But most of all he was tired of being beaten like an animal.

So he put on his one shirt and his one pair of battered corduroy trousers, bundled the rest of his things into a spotted handkerchief, and stole silently from the house.

There was plenty of work available for a willing, sturdy boy, and Joseph spent the next few weeks moving from farm to farm.

Eventually it was discovered that he was a runaway, and he was sent back to his anxious mother. Mrs. Paxton listened to his pleas not to be sent back to his brother’s farm, and instead he was found employment as a gardener’s boy at Battlesden Park, the Bedfordshire home of Sir Gregory Page-Turner.

There, Joseph soon showed a remarkable skill with flowers and greenhouse plants, and by the time he was 20 he felt ready to try out his talents in London.

He had learnt something of botany, and in 1821 he successfully applied for a job with the Horticultural Society at Chiswick. To get more responsible work, he pretended that he was 22, but in spite of this he found that he was still doing much the same sort of work as at Battlesden.

He was seriously thinking of emigrating to America when he came to the attention of the Duke of Devonshire, who needed a new superintendent for the gardens at Chatsworth, his mansion in Derbyshire. The Duke offered the post to Paxton at a salary of £70 a year, plus a cottage in the kitchen gardens.

Joseph accepted the offer eagerly. It was the sort of chance he had dreamed about, and which had never come the way of his late father, who all his life had been a struggling tenant farmer. To celebrate his good fortune, he married Sarah Gregory, the niece of the housekeeper at Chatsworth, and then set about transforming the forests and gardens.

He installed fountains and cascades, built walks and rock gardens, planted trees, and constructed a greenhouse in which he cultivated bananas, pineapples, grapes, and 80 new breeds of orchid. He experimented in different ways of growing tropical fruits and plants under glass, and by 1829 the Duke said contentedly that he “wouldn’t recognise Chatsworth as the same place.” Joseph Paxton was then still only 28, and his fame grew along with his genius. Despite his scanty education, he founded and wrote for the Magazine of Botany. He became friendly with Charles Dickens. Out of loyalty to the Duke of Devonshire, he turned down the chance of becoming Queen Victoria’s gardener at Windsor Castle, and at the ‘shamefully neglected’ gardens at Kew.

In 1839, the Duke took Paxton on a Grand Tour of Europe. The two men visited Geneva, Rome, Athens, Turkey, and Malta; and on his return to Chatsworth, Paxton completed the building of his Great Conservatory, which he had started three years before.

It was the largest greenhouse in the world, 277 feet long, 123 feet wide and 67 feet high. It had a curved roof and one enthusiastic visitor declared that it was the finest building in the world after St. Peter’s in Rome!

Inside this ‘fairy palace’, Paxton cultivated some gigantic pink-and-white water-lilies which he patriotically named Victoria Regia. The flowers had leaves of up to six feet in diameter, and the Duke wrote to the Director of Kew Gardens saying that the sight was “worth a journey of a thousand miles”.

To demonstrate the size and strength of these plants to his friend Lady Newburgh, the Duke decided to make a “special experiment”. He “borrowed” Paxton’s seven-year-old daughter, Annie, and took her to the Conservatory, lifted her over the side of the Victoria Regia’s tank, and deposited her squarely on one of the leaves. Annie stood there with her hands folded, not in the least worried, and perfectly safe!

“It would hold a much heavier load than Annie,” said her father proudly. “I reckon it could carry anything up to 200 pounds in weight without feeling the strain. The underside of the leaf is firmly supported by ribs radiating from the centre. It’s a natural feat of engineering, and a very impressive one.”

This new skill in engineering was shortly to lead to Paxton’s greatest achievement – the design and construction of what Punch magazine christened the ‘Crystal Palace’, to house the Great Exhibition of 1851. In the face of competition from 233 other architects, Paxton’s proposed £80,000 glass-and-iron building was voted the most economical and the most elegant.

The Crystal Palace was, of course, based on Paxton’s Great Conservatory at Chatsworth – and he gave the credit for his inspiration to his celebrated lily, Victoria Regia. “Nature was the engineer,” he said. “Nature had provided the leaf with longitudinal and transverse girders and supports that I, borrowing from it, have adapted in this building.”

The Crystal Palace was officially opened by Queen Victoria on May Day, 1851. The monarch praised Paxton, “who may be justly proud; he rose from being a common gardener’s boy,” and knighted him for his services.

The Crystal Palace was later moved to Sydenham, where it stood until it was burnt to the ground in November, 1936.

The Crystal Palace was the crown of Joseph Paxton’s achievements. His creative life was now almost at an end. In 1854, he became Liberal Member of Parliament for Coventry, and in the following August he was placed in charge of the Army Works Corps, which at his instigation was sent to the Crimea to build defences for the British troops.