Giuseppe Garibaldi inspired the Risorgimento which unified Italy in 1861

This edited article about Garibaldi originally appeared in Look and Learn issue number 296 published on 16 September 1967. 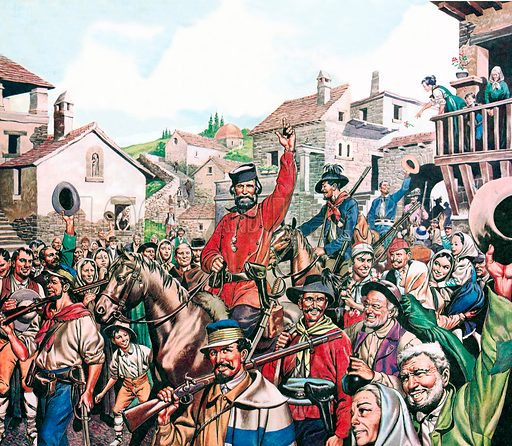 Today, Italy is a united country. You can go from Florence to Milan to Naples to Rome and you will notice changes in such things as the style of architecture and dialect. They are changes – on a slightly larger scale perhaps – similar to those between London and Manchester or Birmingham and Bristol.

But this was not always so. As late as the beginning of the 19th century, Italy was divided into a number of states – Venice, Naples, Rome and many others – each with its own ruler and its own way of life. And the only similarity was that the way of life of the average Italian in any of these states was poor in the extreme. From time to time, the country had been attacked and defeated by the Spanish, the French and the Austrians and there seemed to be little or no hope that Italy would ever become a power in its own right.

This man was Giuseppe Garibaldi. The son of a fisherman, from his youth Garibaldi was filled with a desire to secure freedom and prosperity for his unfortunate countrymen.

Garibaldi was a man of remarkable personality. He could inspire others with the ardour which he himself felt and, because of this, he was a true leader of men.

At first, however, he was not successful. In 1834, while serving in the Sardinian army, he tried to take over the arsenal at Genoa. This was an act of treason against the then King of Sardinia-Piedmont and Genoa, Charles Albert. The plot was discovered and Garibaldi was sentenced to death. But he managed to escape to South America.

At the time, Charles Albert was opposed to the activities of the Young Italy party of which Garibaldi was a member.

The Young Italy party’s aim was the unification of Italy. This was Garibaldi’s dream, and nothing could be allowed to stand in the way.

He returned to Italy and his freedom movement met with some success in the years 1848-49. And in 1859, he won several victories against the Austrians in the north.

But, deciding that not enough was being done to liberate the Italians of Sicily and Naples in the south, he recruited a volunteer army of his own. He collected 1,070 men – ‘the red shirts’, or ‘the thousand’, as they were called – and inspired them with patriotic fervour.

Garibaldi and his army invaded Sicily and won an overwhelming victory at the Battle of Palermo in 1860. The occupying army of the Bourbons was driven out and Garibaldi was hailed as the hero of Italy.

He then crossed to the mainland and made a triumphal progress into Naples. There he won the Battles of Reggio and the River Volturno against the Spanish. He gave the kingdom of Naples and Sicily to Victor Emmanuel, the son of Charles Albert and a man much more sympathetic to Garibaldi’s cause, and proclaimed him King of Italy.

To a great extent, it was the Battle of Palermo that changed the history of Italy. Later in his life, Garibaldi did many foolish things. He insisted on attacking Rome – the Papal state – for which he received no help and no encouragement. And he was defeated – twice.

But Garibaldi, more than anyone else, set in motion the work of Italian unification. After 1860, Italy was united, except for the states of Venice and Rome. Venice was regained from Austria in 1866, and Rome was added during the Franco-Prussian war of 1870.

More than anything, Garibaldi was a patriot, a lover of his country, and as such he will always be remembered. But he was also one of the greatest soldiers of all time.