The missionary Adoniram Judson petitioned the Emperor of Burma

This edited article about Christian missionaries originally appeared in Look and Learn issue number 279 published on 20 May 1967. 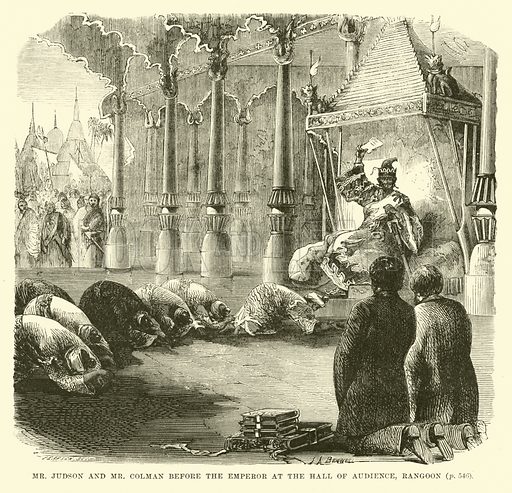 Mr Judson and Mr Colman before the Emperor at the Hall of Audience, Rangoon

It is a great mistake to think that the tremendous spread of the Christian faith since the early 19th century has been wholly the work of British missionaries. Of these there have been many, of course, but there have also been as many from Germany, Scandinavia, Holland, Switzerland, and other parts of Europe. And there have been a great many from America also, including the remarkable man who first took Christianity to Burma, Adoniram Judson.

Born in Massachussets in 1788, Judson grew up in the strong Protestant traditions of that part of the U.S.A. which had been observed since the days of the Pilgrim Fathers. Already there was in existence an American Board of Foreign Missions, and Judson’s first duty as a missionary was to come to England and try to develop closer contacts with the work of similar Mission Boards on this side of the Atlantic.

In this he was so successful that he made his first missionary tour to Asia in association with English missionaries. In 1812 he sailed for Calcutta, where a flourishing work had been established by English Baptist Missionaries, led by William Carey. Unlike them Judson, being a foreigner, was refused permission to remain in the territories then administered by the East India Company, and had to sail away to the distant island of Mauritius.

The country which attracted Judson most was Burma, at that time a land little known to people from the West. It was a stronghold of the Buddhist faith, and had heard practically nothing of Christianity at the time Judson and his wife landed at Rangoon, the Burmese capital, in 1813.

Judson gave his whole missionary career to Burma, and his first wife gave her life to the same cause, for she died there of a tropical disease in 1826. Like so many other pioneer missionaries, Judson decided that his first task was to translate the Bible into the language of those among whom he was working. He eventually completed this in 1835, and it remains to this day one of the finest missionary translations ever made, and still in great demand among the Burmese.

Judson suffered greatly from the unhealthy tropical climate of the coast, and eventually transferred his headquarters to the hill-country of the interior. There, among tribes such as the Karens, he found a greater readiness to listen to his message than was the case in Rangoon, and he planted the seeds of what were to become large and influential Christian churches.

Among his notable achievements was the production of the first Burmese-English dictionary, which in a revised form is still in use today, even though it was first issued in 1849. He died during a health-seeking sea voyage in 1850.