The Duke of Wellington loved his country and his horse

This edited article about the Duke of Wellington originally appeared in Look and Learn issue number 261 published on 14 January 1967. 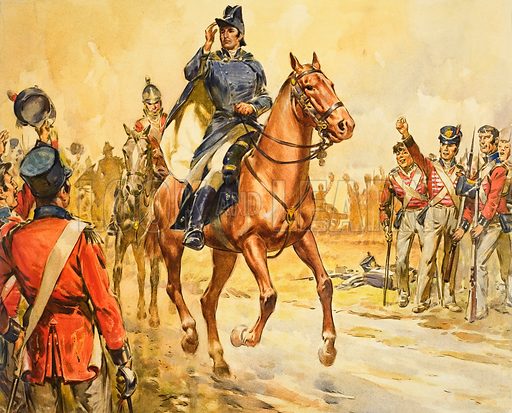 Arthur Wellesley, 1st Duke of Wellington (1769-1852), was the greatest British soldier of his day. His charger, Copenhagen, was almost as famous at the time as his great master!

Wellington bought the stallion in 1812, during the Peninsula War. He was a four-year-old and took his name from the siege of Copenhagen in 1807. For the rest of the Peninsula campaign, which established Wellington as a great general, man and horse were inseparable in action.

The picture above shows them after the victory of Salamanca – rider and horse acted as a tremendous morale-booster to the troops, often swaying an action by their sudden appearance in the thick of battle.

But it was Waterloo, in 1815, which was Copenhagen’s finest hour. On 17th June he was ridden from 10 a.m. until 8 p.m. without food; then, on the 18th, the day of the great battle, he was mounted at dawn and ridden for seventeen hours.

After the battle, Wellington rode him to the village of Waterloo. The Duke was worn out and saddened by the slaughter, despite the fact that he had defeated Napoleon: but his fiery horse, feeling like celebrating perhaps, lashed out with his hooves when his master dismounted, and nearly killed him! In Brussels next day, he broke loose and ran round the town.

Copenhagen, now a national hero, spent his final years on Wellington’s country estate. Few rode him with much pleasure except the Duke. “Take care of that there horse, he kicks out!” shouted some soldiers at one lady-rider.

Copenhagen died in 1836 and was buried with full military honours. Wellington told countless stories about his beloved horse until his own death.