This edited article about Jonas Hanway originally appeared in Look and Learn issue number 227 published on 21 May 1966. 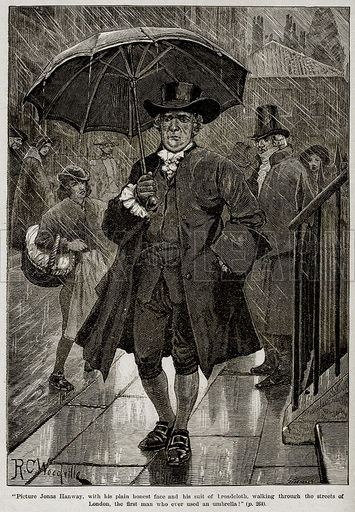 Jonas Hanway, British wool merchant, stood in the main street of a Persian city one day in the mid-18th century to watch a prince pass by. In the centre of the long and elaborate procession the prince could be seen, shaded from the sun by a strange, tent-shaped structure.

Hanway, who had the interests of humanity at heart, but who was at the same time a shrewd business man, thought lesser Persians might appreciate similar protection from the sun, so he had a large number of these structures, which we would call umbrellas, made in a smaller size.

To his dismay, when he tried to sell them he faced an immediate outcry, for what he had not realized was that umbrellas were an Eastern symbol of royalty and power. So serious was his blunder that Hanway was forced to leave the country without delay.

But Jonas Hanway was a practical man. Surveying the rainy British skies on his return in 1750, he concluded that an umbrella which warded off the Persian sun could equally well divert the English rain. So on wet days he began carrying one made of taut material stretched over wooden ribs.

When he first emerged from his house under an open umbrella, Hanway caused a sensation. He met with a considerable amount of hostility, but he was not the sort of man to be deterred from a sensible habit by adverse public opinion or comment.

He had, in particular, to face the active opposition of the carriers of sedan chairs and the drivers of hansom cabs. Their business boomed in the rain, and when they saw Hanway making his way with umbrella aloft, they would pelt him with rubbish.

On one occasion, the driver of a hansom cab tried to mow him down with his vehicle, at which point Hanway discovered a further merit for his “newfangled” contraption by giving the man a good thrashing.

Thanks to Hanway’s perseverance, the umbrella was firmly established on the streets of London before he died.