This edited article about Zinnias originally appeared in Look and Learn issue number 174 published on 10 May 1965. 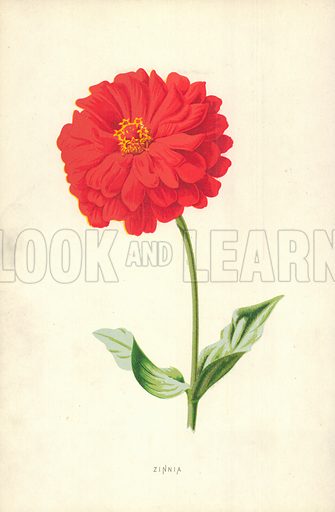 This bright and beautiful bunch of blooms belongs to the Daisy family. They are called Zinnias, which is the name for a group of Mexican plants of which, generally speaking, only one kind, Zinnia elegans, is grown in Britain.

But as you can see, British gardeners can have a wonderful display of colour from their one kind of Zinnia; indeed, from it they can obtain many showy varieties greatly valued for summer beds and borders.

Both single and double flowered varieties of Zinnia elegans are grown, the double one being particularly handsome, large and with a brilliant colour range which includes orange, scarlet, purple, rose, salmon and yellow.

Zinnias are easy flowers to grow. They are raised from seeds sown in compost during the first fortnight in March. The seeds should be set about a quarter of an inch deep and ideally should be placed in a greenhouse.

When the seedlings are about an inch and a half high they should be potted separately in small pots filled with two-thirds of loam and one-third leaf-mould and well-decayed manure. You should take care to see that the soil does not become too dry.

When the little plants have become well rooted, they should be hardened off in a cold frame and planted out of doors at the end of May or early June.

Zinnias thrive best in well-drained rich soil and must be planted in a fully sunny position, about one foot apart.

Another way to raise them is to sow the seeds out of doors in mid-May. But the way to obtain the finest plants is to raise them under glass in the way described.