The Cornflower provided balm to a legendary centaur

This edited article about the cornflower originally appeared in Look and Learn issue number 168 published on 3 April 1965. 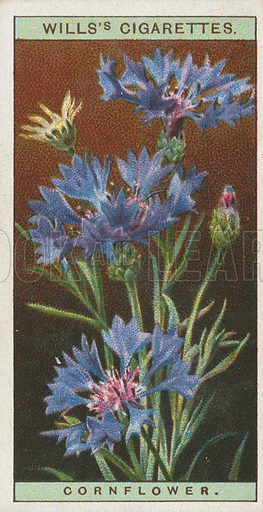 One of our most attractive wild flowers, the Cornflower, is a hardy annual, that is, it grows from seed, flowers, ripens its seed and dies all within a year. Botanists call it Centaurea cyanus, a name that commemorates the Centaurs of Greek mythology.

Legend has it that when Chiron, wisest and bravest of the Centaurs, which were half human and half horse, was wounded by an arrow from the great Hercules, he was cured by a potion made from a member of the Cornflower family.

As a wild plant the Cornflower is bright blue, but plant breeders have changed its appearance a lot in converting it into a very easy to grow and colourful garden flower, and one of the best of all hardy annuals for cutting.

One of the loveliest strains is the one shown here, named Polka Dot. It forms bushy little plants about 12 in. tall, smothered in summer with fully double flowers in a delightful range of colours.

The blue Jubilee Gem and Rose Gem are two other varieties of this type that are popular for garden display, but the nurserymen who grow vast quantities of cornflowers for the cut flower market prefer the strains which grow 3 ft. tall, with fully double flowers in an equally gay colour range.

Gardeners usually sow Cornflowers where they are to grow, in March or April, in shallow drills (rows) 9 in. apart, and when the seedlings are an inch or so tall they thin them to 9 in.

But, as they are so hardy they can also be sown in September to stand the winter and bloom earlier, which is very useful if you want flowers for cutting.

Cornflowers are happiest in sunny positions and thrive in all kinds of soil.

There are many other kinds of Centaurea, including a number that are perennial and flower year after year. But none is so attractive as our hardy annual Cornflower.