The Ant and the Woodpecker

This edited article about nature originally appeared in Look and Learn issue number 168 published on 3 April 1965. 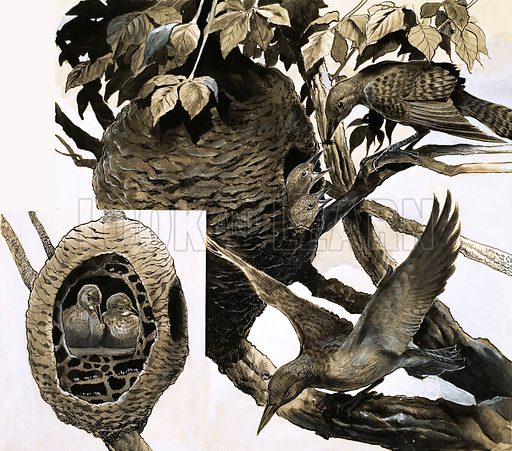 There are about 2,000 known species of ants and they occur in nearly all parts of the world except the frozen regions. Some of them live on the ground, some live in trees, others in plants and flowers.

The Black Tree ants of India and Ceylon are tree-dwellers and under normal circumstances they will viciously attack and sting any intruder in their nest. One of the favourite meals of the Black Tree ant is birds’ eggs.

The Southern Rufous woodpecker also lives in India and Ceylon and, as woodpeckers do, he eats ants. But by some freak of nature the ant-eating woodpecker and the egg-eating ants manage to live in the same house together and neither touches the other!

At nesting time the Southern Rufous woodpecker makes a hole in the ants’ nest in the tree branches and makes its own nest and lays its eggs there.

If you have seen the side of an ants’ nest burrowed into, you know what chaos it can cause. Although the woodpecker creates similar havoc, and some of the ants’ eggs are tipped out, the ants simply grin and bear it.

Then when the woodpecker’s nestlings appear they spend their youth entirely untouched by the stinging ants scurrying around them.

Ants are considered to be the most intelligent of all insects with a highly developed sense of community living. Naturalists have proved that the insects are capable of communicating with each other. An ant that finds a scrap of food too large to carry away will return to its nest for assistance. And if one ant finds a large heap of food and another a small one, the one with the large heap will bring more helpers to his aid than the one with the small heap.

Ants also have a keen sense of memory. If an ant is taken from its nest, kept in captivity for several months, then returned to the nest in company with a stranger ant, the stranger will be killed, the exile welcomed home like a long lost brother.

No wonder, then, that the black tree ant has come to an understanding about co-existence with the Southern Rufous woodpecker!