The lethal mosquito and harmless gnat

This edited article about the mosquito originally appeared in Look and Learn issue number 115 published on 28 March 1964. 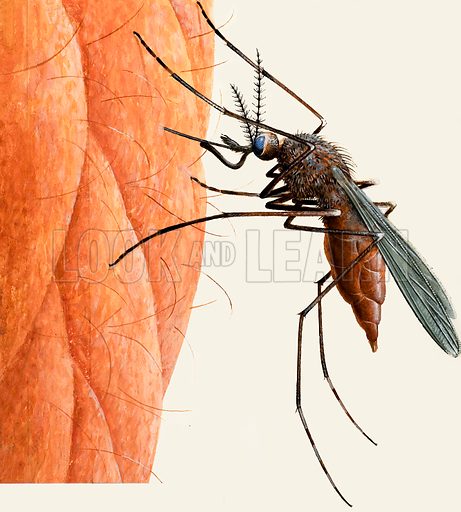 The female mosquito attacks by R B Davis

It is probable that the deadly weapons of the malaria carrying mosquitoes have claimed more victims among mankind than the swords and spears, the guns and bombs of all the countless armies that have met in battle since history began.

Yet it was not until the end of the last century that an English scientist, Sir Ronald Ross, discovered that the mosquito was responsible for the malaria that every year claimed thousands of natives and Europeans living in tropical climates.

Not that the mosquito is the actual cause of malaria: it only carries it. What happens is that a mosquito bites a person suffering from malaria.

The mosquito bites to suck blood and the blood it sucks from a malaria victim contains the parasite or spores responsible for malaria.

Continuing its flight, the mosquito bites a second person, who may not have malaria: but he soon will. Some of the malaria spores pass from the insect into the blood stream of the second person bitten and infect him.

Incidentally, it is only the female mosquito that is responsible for carrying malaria, because it is only she who bites human beings. The male mosquito is quite harmless as it lives on the juices of vegetables.

The mosquito is not native to tropical countries, but is quite common in Britain. Fortunately, however, they are not dangerous because there are not many malaria victims in Britain for them to bite.

Malaria-carrying mosquitoes or, to give them their scientific name, Anopheles, are close relatives of the common gnats, which scientists call Culincines.

There are a number of important differences between the two.

When a gnat is at rest it holds its body parallel with the surface to which it is clinging. But a mosquito at rest has its body raised up with the tail in the air. The mosquito’s antennae or feelers are shorter than its proboscis or snout, whereas the gnat’s antennae project beyond its proboscis.

Another distinction between the mosquito and gnat are the palps or sense organs. In the mosquito these are folded along the proboscis, making that organ look much thicker than that of the gnat. The gnats palps are very short and hardly visible at all.

Both the female gnat and the female mosquito lay their eggs in any still water, from roadside puddles or garden water-butts to ponds or lakes.

Mrs. Mosquito’s eggs, which are laid singly, are boat-shaped and float lengthways on the water. Mrs. Gnat’s eggs are cigar-shaped, pointed at one end and rounded at the other and as they are laid she gathers them with her hind legs and sticks them together with an adhesive secretion to form a floating raft.

The rafts each contain about 300 eggs, and each egg has its pointed end upwards and its domed end downwards. You can often see these rafts of gnat eggs during the summer months floating on the water like little flakes of soot.

In due course larvae emerge from the eggs directly into the water and spend the next part of their lives as part of pond life. The mosquito larvae are usually somewhat longer and thinner than gnat larvae.

Both larvae breathe air by means of a tube at the hind end, floating just below the surface to take in the air. While breathing in this way the mosquito larvae float head downwards whereas the gnat larvae float horizontally.

They feed by using the long hairs on the head to sweep into their mouths tiny particles of algae and other water life.

Both mosquito and gnat larvae spend most of their time just below the surface of the water breathing through their tubes, called respiratory organs. The larvae are relatively heavier than water so that they would sink to the bottom were they not equipped with flaps round their breathing tubes. They spread the flaps over the water, so providing a kind of float which keeps them buoyant.

Larvae hatched in the autumn hibernate throughout the winter. They develop a special breathing organ which stores enough air for them to breathe even if the surface of the water is frozen over.

From the larval stage the mosquito and gnat develop into pupae. Both pupae have very large heads and curved bodies, the body of the mosquito more so than that of the gnat.

Shortly before the pupa becomes a fully-developed insect, it stretches itself straight out on the surface of the water. A small quantity of carbon dioxide gas that has collected under the pupa’s skin or cuticle then expands and bursts the skin. Through this opening the mosquito or gnat, called an imago at that stage, emerges.

For a few minutes the imago rests on the discarded pupa skin while its legs harden and its wings dry. The now fully developed gnat or mosquito then flies off.