Margaret McMillan was a health pioneer in children’s education 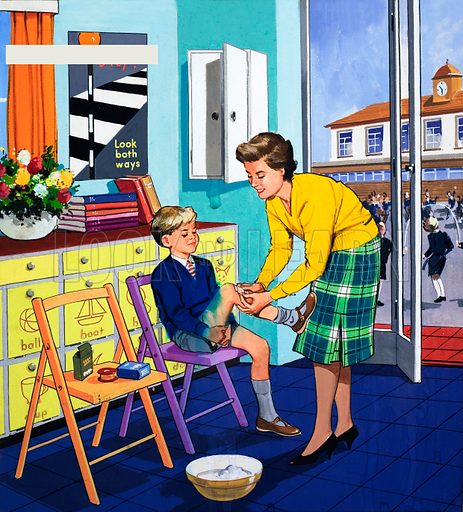 A nurse examines a schoolboy in a school clinic

“Come closer and let me listen to your chest,” said the doctor, producing his stethoscope.

The little boy looked doubtfully, first at the lady and then at the doctor. They both looked kind, so he obligingly approached the doctor.

He was the first of millions of British children to have a routine medical examination at school.

Today, school clinics, nursery schools and physical education in schools are taken for granted. But only about 70 years ago. Margaret McMillan had to fight to get these ideas accepted.

Margaret McMillan was born in New York in 1860. She grew up in Scotland with her mother and her sister Rachel. She planned to become a governess, then for a time she wanted to be an actress. In fact she achieved neither of these ambitions, for she grew interested in politics and joined the Independent Labour Party in 1893.

A year later, she was elected to the governing body of the local school and, seeing the poor state of health of so many young school children, she realised that her life’s work lay in helping them.

By 1899, she had successfully fought to impress on her colleagues the importance of regular medical inspection for children, and supervised it herself in several schools.

At the same time, with the help of her sister, she began her first nursery school. And, as soon as that was making progress, turned her energies to establishing camp schools for boys.

In 1910, Margaret and Rachel opened their largest clinic for sick children, in Deptford. After a year of hard work, they won official recognition and government help.

During the First World War, the two sisters set up an open-air nursery school for under-fives which caused world-wide interest.

Margaret’s final success came in 1929 when she founded a college for training infants’ teachers which carried on her ideas.