The myth of Artemis and her sleeping lover, Endymion 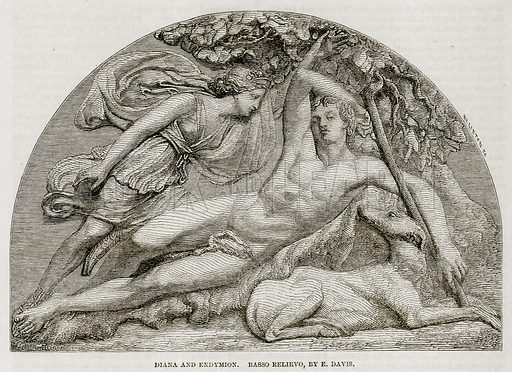 Diana (Artemis) and Endymion, a basso relievo by E Davis

Selene, beautiful goddess of the moon and of hunting (sometimes called Artemis), addressed the stern-faced gods of Mount Olympus.

“I shall never marry,” said Selene. “I want to remain a single goddess all my life.”

The gods were astonished. For a long time each of them had been hoping to claim the lovely goddess as his bride. But so earnest was Selene that eventually Zeus, the supreme god, agreed reluctantly to grant her wish.

Nonetheless, the Greek story-tellers would not tolerate so beautiful a goddess being completely unmindful of the handsome men of Greece. So although Selene never married, men continued to admire her wherever she went.

One evening, after her brother Apollo, the sun god, had put away his fiery steeds for the day, Selene took her glistening moon chariot across the sky.

She had not gone half way when, casting a moonbeam down upon a hilltop, she saw a handsome young shepherd fast asleep on the grass.

Selene swept noiselessly down to earth in her chariot and gently kissed the youth. Endymion. Half awakened by the kiss. Endymion stared bewitched at the lovely goddess as she hastened away.

Already Endymion was in love with her. The next night, he lay upon the same hill, feigning sleep, in the hope of catching sight of Selene again. And she, just as enamoured as he was, again came down to earth and kissed him.

Night after night Selene stopped her journey across the sky to kiss the shepherd.

And night after night he waited for her upon the hilltop, watching through half-shut eyes as she glided down to him.

Selene, of course, was in a dilemma. She was hopelessly in love with this mere mortal, but she had sworn to the gods that she would never marry. At length, determined that if she could not marry Endymion herself then no one else would, she put him into an eternal sleep and carried him off to a secret cave.

And there each night for evermore she stopped and kissed the sleeping shepherd.

After that several other young men fell under the spell of this magnificent goddess. One of them was a young hunter named Orion, who used to walk regularly in the forests with his dog Sirius.

One day Orion fell in love with a beautiful princess who was the daughter of a king named Oenopian. The king agreed to give Orion his daughter’s hand, on condition that he did some brave deed to show his worth.

Poor Orion! He was not at all anxious to prove his valour, so he decided to take the princess away with him. Unfortunately, King Oenopian got to hear of this and, not only did he refuse to let Orion marry the princess, but he blinded him as well.

Luckily for Orion, he stumbled upon a friend who kindly led him to Apollo. Apollo lent the blind hunter a shaft of his light, and Orion’s sight was restored.

Orion looked around and his glance fell upon Selene. Soon the young hunter and the goddess of hunting were very much in love.

Now Apollo was jealous of his sister’s happiness. One day while walking on the seashore, he called her to his side.

“Sister,” said Apollo, “as the goddess of hunting, you should be a good markswoman with bow and arrow. Come, test your skill.”

Apollo handed her a bow and pointed out to sea at a dark speck in the water.

Selene drew back the bowstring and fired. Swift and sure, the winged arrow whined over the water and struck the dark speck. Only then did she realise that she had been tricked. For that dark speck was the head of Orion, who was bathing in the sea.

Selene wept for her dead hunter. When his body was washed up she placed it in the sky as a group of stars. And when Sirius, his dog, died she put him in the heavens, too.